Dear friends,
as you may be aware, Madonna, is currently performing in White City (Tel Aviv) ignoring the call by Palestinian civil society for artists and cultural performers to boycott Israel until it abides by International Law.

Madonna has attempted to whitewash her whitewashing of Israel's apartheid and occupation policies by inviting "peace" groups to the concert (originally she had announced she was going to stage a "peace concert" but it was change to invitations to her existing concerts).

Many so-called Israeli "peace" groups accepted her invitation, thus actively participating in the whitewashing of Israel's human rights abuses against the Palestinian people.

As Boycott from Within, an Israeli group which campaigns in support of the Palestinian civil society BDS call issued an open letter to Israeli NGO's earler this month in relation to Madonna's breaking of the boycott picketline and Israeli NGO's accepting her concert invitation that:


Each and every artist playing Israel while turning a blind eye to its ongoing occupation and apartheid against the Palestinian people, is also helping it maintain a facade of business as usual while sending a green light to the continuation of the systematic violations of international law and the disrespect of universally recognized human rights.

Therefore, holding a “peace concert”, which utterly disregards Palestinian rights would be nothing but a blatant attempt at whitewashing Israeli crimes – an effort that may only be carried out with the help and active participation of your organization. It is an unfortunate situation that most Israeli NGOs will assist in such a re-branding campaign rather than shun away from it. We therefore urge you to side with freedom, justice and equality. Take these values seriously and refuse to lend a hand to the peace propaganda machine.


While a number of Israeli NGO's including the group Peace Now accepted Madonna's invitation, the invitation was rejected out of hand by the principled activists involved in Anarchists Against the Wall and the Sheikh Jarrah Solidarity Movement.  Both groups have issued public statements explaining that they had no interesting in whitewashing Israel's human rights abuses.

Anarchists Against the Wall in their media release state they refuse to be part of Israel and Madonna's whitewash campaign, highlighting both their support for the 2005 Palestinian BDS call and the restrictions and human rights abuses against their Palestinian comrades by the Israeli government (for more details see below).

The Sheikh Jarrah Movement in a statement posted to their Facebook page noted:


Madonna has never criticised the Israeli occupation, its separation policies, or its regime of privileges. Therefore, we believe that the reason she sought the presence of Israeli peace activists was to further a public image of an artist who promotes peace in the Middle East. We refuse to be a public relations gimmick for Madonna at the expense of the Palestinians. This is not our way.

I have included below the press release issued by Anarchists Against the Wall, as well as the news story run by Israeli media outlet, Walla, on their refusal.

Also included is a new video made by activists in Israel and Palestine highlighting the hypocrisy of Madonna's peace concert and the aparthied system faced by Palestinians.

You can also read the statement issued by the Israeli group Boycott from Within calling on Madonna not play in Israel and to respect the Palestinian BDS campaign here. 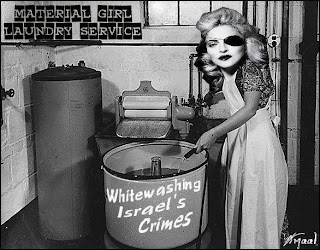 Anarchist Against the Wall PRESS RELEASE:
Anarchists Against the Wall: "We Challenge the Apartheid Government of Israel to Give Permits to 4 of Our Palestinian Comrades to Go to the Madonna Concert."

Anarchists Against the Wall were surprised to find out that they were one of the NGOs chosen by Madonna's production company, Shuki Weiss LTD, to receive free tickets to the extra concert slated for later this week. "We are shocked that the government, that shoots at us every Friday, by proxy of it's occupation army, is trying to buy us with tickets to Madonna's concert", said A, an activist with the group.

Anarchists Against the Wall is an action group of Israeli citizens who have been joining the weekly demonstrations in Palestinian villages, for the past decade. "Madonna has never criticised the Israeli occupation, its separation policies, or its regime of privileges. Therefore, we believe that the reason she sought the presence of Israeli peace activists was to further a public image of an artist who promotes peace in the Middle East. We refuse to be a public relations gimmick for Madonna at the expense of the Palestinians. This is not our way.
In 2005 a call was issued by Palestinian civil society for boycott, divestment and sanctions of the state of Israel and its institutions, including a cultural boycott. Madonna was approached by the movement before her 2009 concert in Israel, and was asked to respect the Palestinian call for cultural boycott of Israel and cancel her performance.

"The 2009 concert came at the heels of "Cast Lead", when over 1400 Palestinians were killed by the Israel's army in Gaza,'" A says, "Shuki Weiss LTD, along with a group of other producers of big name celebrities calling themselves 'Creative Community for Peace', work hand in hand with the Israeli Government in an attempt to use these concerts to whitewash the brutal military occupation of the Palestinian people, and present an image of normalcy in a place where apartheid and ethnic cleansing is being practiced as daily routine. Madonna's performances are just one example of the deliberate use of big names from abroad to divert the world's attention from these policies. Madonna's concert is an approval of apartheid."

Stopped By Apartheid on the Way to Madonna's "Peace Concert"
video by: noamimlyth

you can also watch the above video on youtube here


Madonna's concert guests: "Anarchists Against the Wall"
By Nir Yahav, system and Walla!
Wednesday, May 30, 2012, 21:15
...
The Activists of "Anarchists Against the Wall" (AATW) were surprised to find out they had been invited to Madonna's concert at Ramat Gan Stadium (tomorrow). The invitation came as part of an initiative by Madonna, who had intended to hold a concert for peace, but when it was merged with the first concert, it was decided to invite peace organizations and human rights groups free of charge.

AATW Activists announced that they refuse to accept the invitation, because the of situation which Palestinians in the territories face. "Our friends are in an open-air prison and are denied the most basic rights," said an activist in the group. "Our friends are prevented from coming to the show because they live under a policy of separation that prevents the freedom of movement." We are not prepared to accept this bribe when our colleagues are in administrative detention, an open-air prison in Gaza, denied their most basic rights ".

"Madonna's performances are just one example of the deliberate use of the international celebs in order to distract the world's attention away from these policies," the group added. "Madonna's appearance amounts to an expression of agreement with apartheid."

[Local] sources in the concert's production told Walla! Culture that peace organizations had indeed been invited to attend the show, but the decision on which organizations should be invited had not been made by the Israeli production team of the show.
Original Hebrew Walla article can be read here. English Translation by Ofer Neiman.