A grotesque spectacle and a Trump Square in Jerusalem

Dear friends,
a MUST READ article by Michelle Goldberg which was first published in the New York Times and republished by the Fairfax Media in the Sydney Morning Herald.

Goldberg makes clear in her article that the Trump's Embassy move is an alliance between rightwing  anti-semites in the Christian fundmentalist (one of the bases Trump courts) and the Zionist movement.  Goldberg writes:

The event was grotesque. It was a consummation of the cynical alliance between hawkish Jews and Zionist evangelicals who believe that the return of Jews to Israel will usher in the apocalypse and the return of Christ, after which Jews who don't convert will burn forever.

Religions like "Mormonism, Islam, Judaism, Hinduism" lead people "to an eternity of separation from God in Hell," Robert Jeffress, a Dallas megachurch pastor, once said. He was chosen to give the opening prayer at the embassy ceremony. John Hagee, one of America's most prominent end-times preachers, once said that Hitler was sent by God to drive the Jews to their ancestral homeland. He gave the closing benediction.

Goldberg also draws attention to the grotesque spectacle in Jerusalem and Gaza, where Israel has massacred more than 55 Palestinians, including children.

Please support the Nakba rallies and protests against Israel's massacre in Gaza in your city. If you are in Melbourne, please join the rally on Saturday 19th May at 12 noon at the State Library of Victoria.
In solidarity, Kim

A grotesque spectacle and a Trump Square in Jerusalem

New York: On Monday, Ivanka Trump, Jared Kushner and other leading lights of the Trumpist right gathered in Israel to celebrate the relocation of the US Embassy to Jerusalem, a gesture widely seen as a slap in the face to Palestinians who envision East Jerusalem as their future capital. 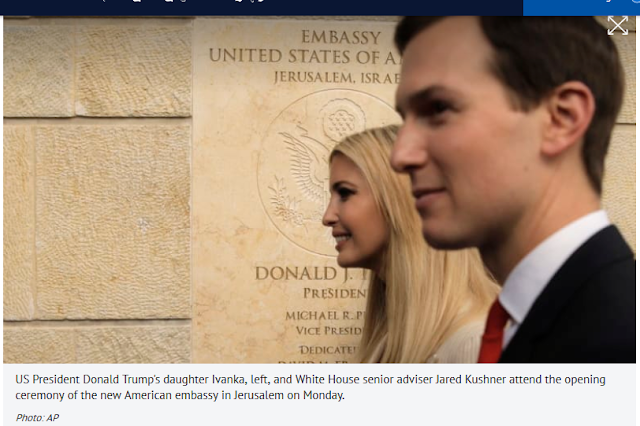 The event was grotesque. It was a consummation of the cynical alliance between hawkish Jews and Zionist evangelicals who believe that the return of Jews to Israel will usher in the apocalypse and the return of Christ, after which Jews who don't convert will burn forever.

Religions like "Mormonism, Islam, Judaism, Hinduism" lead people "to an eternity of separation from God in Hell," Robert Jeffress, a Dallas megachurch pastor, once said. He was chosen to give the opening prayer at the embassy ceremony. John Hagee, one of America's most prominent end-times preachers, once said that Hitler was sent by God to drive the Jews to their ancestral homeland. He gave the closing benediction.

This spectacle, geared toward Donald Trump's Christian American base, coincided with a massacre about 80 kilometres away. Since March 30, there have been mass protests at the fence separating Gaza and Israel. Gazans, facing an escalating humanitarian crisis due in large part to an Israeli blockade, are demanding the right to return to homes in Israel that their families were forced from at Israeli's founding. The demonstrators have been mostly but not entirely peaceful; Gazans have thrown rocks at Israeli soldiers and tried to fly flaming kites into Israel. The Israeli military has responded with live gunfire as well as rubber bullets and tear gas. In clashes Monday, dozens of Palestinians were killed and thousands wounded, according to the Gaza Health Ministry. 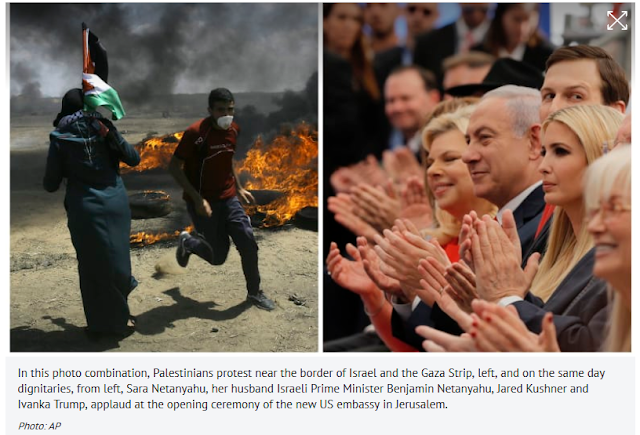 The juxtaposition of images of dead and wounded Palestinians and Ivanka Trump smiling in Jerusalem like a Zionist Marie Antoinette tell us a lot about America's relationship with Israel right now. It has never been closer, but within that closeness there are seeds of potential estrangement.

Defenders of Israel's actions in Gaza will argue no country would allow a mob to charge its border. They will say that even if Hamas didn't call the protests, it has thrown its support behind them. "The responsibility for these tragic deaths rests squarely with Hamas," a White House spokesman, Raj Shah, said. 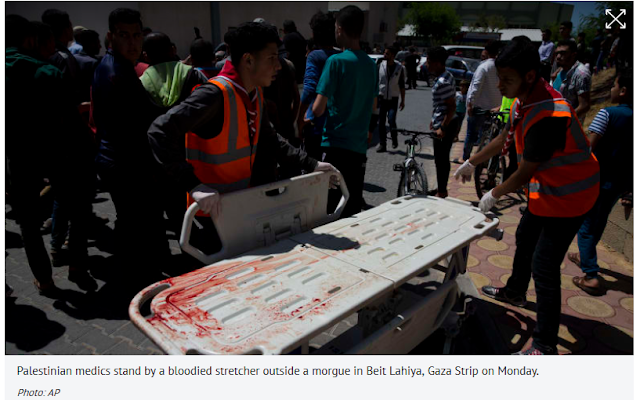 But even if you completely dismiss the Palestinian right of return — which I find harder to do now that Israel's leadership has all but abandoned the possibility of a Palestinian state — it hardly excuses the Israeli military's disproportionate violence.


"What we're seeing is that Israel has used, yet again, excessive and lethal force against protesters who do not pose an imminent threat," Magdalena Mughrabi, Amnesty International's deputy director for the Middle East and North Africa, told me by phone from Jerusalem.

Much of the world condemned the killings in Gaza. Yet the United States, Israel's most important patron, has given it a free hand to do with the Palestinians what it will. Indeed, by moving the embassy to Jerusalem in the first place, Trump sent the implicit message that the US government has given up any pretence of neutrality. 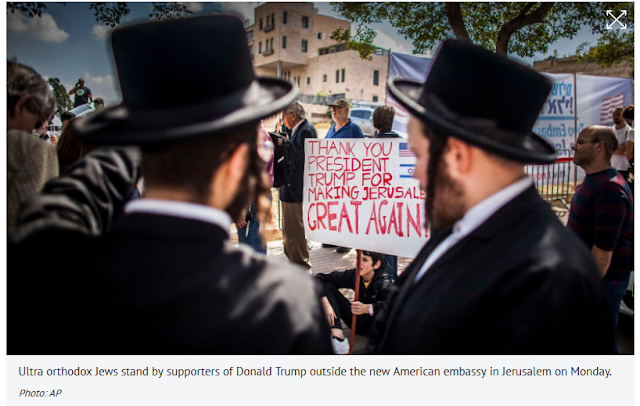 Reports of Israel's gratitude to Trump abound. A square near the embassy is being renamed in his honour. Beitar Jerusalem, a soccer team whose fans are notorious for their racism, is now calling itself Beitar "Trump" Jerusalem. But if Israelis love Trump, many Americans — and certainly most American Jews — do not. The more Trumpism and Israel are intertwined, the more left-leaning Americans will grow alienated from Zionism.


Even before Trump, Israeli Prime Minister Benjamin Netanyahu helped open a partisan divide on Israel in American politics, where previously there had been stultifying unanimity.

"Until these past few years, you'd never heard the word 'occupation' or 'settlements' or talk about Gaza," Jeremy Ben-Ami, president of the liberal pro-Israel group J Street, said of American politicians. But Ben-Ami told me that since 2015, when Netanyahu tried to undercut then president Barack Obama with a controversial address to Congress opposing the Iran deal, Democrats have felt more emboldened. "That changed the calculus forever," he told me. 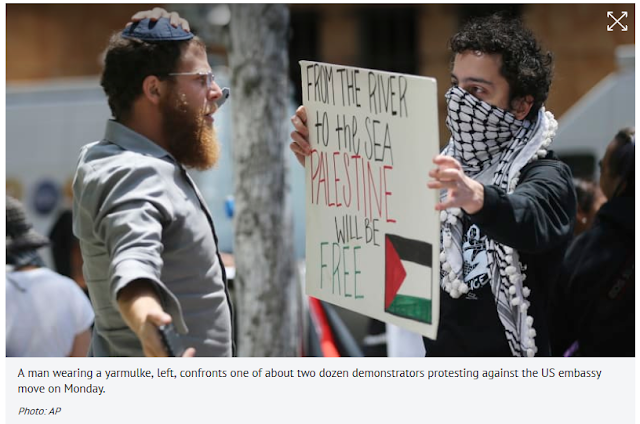 The events of Monday may have changed it further, and things could get worse still. Tuesday is Nakba Day, when Palestinians commemorate their dispossession, and the protests at the fence are expected to be even larger.


"People don't feel like they can stay at home after loved ones and neighbours have been killed for peacefully protesting for their rights,"Abdulrahman Abunahel, a Gaza-based activist with the boycott, divestment and sanctions movement, told me via email.

Trump has empowered what's worst in Israel, and as long as he is president, it may be that Israel can kill Palestinians, demolish their homes and appropriate their land with impunity. But some day, Trump will be gone. With hope for a two-state solution nearly dead, current trends suggest that a Jewish minority will come to rule over a largely disenfranchised Muslim majority in all the land under Israel's control. A rising generation of Americans may see an apartheid state with a Trump Square in its capital and wonder why it's supposed to be our friend.
Michelle Goldberg is an American blogger, author and New York Times columnist.
Posted by Kim at 9:51 PM No comments: