Dear friends,
Ah'd Tamimi, the daughter of my friends Bassem and Nariman Tamimi from the village of Nabi Saleh has just been awarded the Hanzala Courage Award in Turkey.

Many of you will have seen photos of Ah'd and other children from Nabi Saleh regularly challenging Israeli occupation forces who invade the village and terrorise the residents on a regular basis.

Ah'd comes from a family of activists who have refused to be cowered by the Israeli state and/or the Israeli military.  Her father, mother and siblings actively take part in Nabi Saleh's popular unarmed resistance against Israel's occupation and apartheid politics.

Ah'd's father, Bassem, is currently in prison for participating in and leading non-violent civil disobedience actions against Israel's occupation and apartheid system.  Bassem spent a year in prison for being a leader of the non-violent struggle in Nabi Saleh and has been imprisoned again for participating in the first BDS action carried out in an illegal Israeli colony in the occupied Palestinian Territories.

Ah'd's mother, Nariman, has been also been arrested several times for her non-violent activism against Israel's occupation and apartheid policies.   Earlier this year, A'hd's brother was also arrested and detained by the Israeli military.

Ah'd, along with the other children of Nabi Saleh and Palestine, show amazing courage every single day in the face of a brutal occupation and apartheid regime. 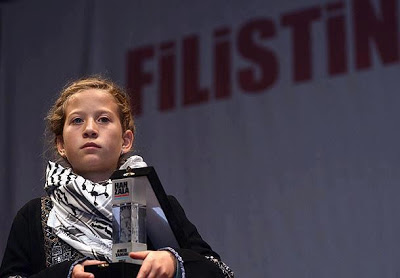 Ahed Tamimi who challenged the Israeli soldiers that had arrested her brother was awarded with 'Handala Courage Award'.


Palestinian girl Ahed Tamimi who challenged the Israeli soldiers that had arrested her brother was awarded with "Handala Courage Award" in Istanbul on Wednesday.

Visiting Turkey as being the guest of Basaksehir Municipality of Istanbul, 13-year-old Tamimi attended a series of events ahead of the award ceremony and opened an art exhibition titled "Being children in Palestine".

She thanked Turkish children for welcoming her as she was one of them, and called on the Palestinian children to stand tall, at the ceremony.

Tamimi said she was proud to get the Handala award which would enhance her strength. She said she showed her fist to the soldier and thought she could make Palestine free.
Answering questions of AA correspondent, Tamimi said she would like to be a lawyer in order to contribute to the Palestinian issue.

Handala Courage Award, handed out by the Basaksehir Municipality, was named after the cartoon character Handala created by Palestinian cartoonist Naji Salim al-Ali noted for the political criticism of the Arab regimes and Israel in his works.

Handala, a 10-year-old boy, became an icon of Palestinian identity and defiance. (aa) 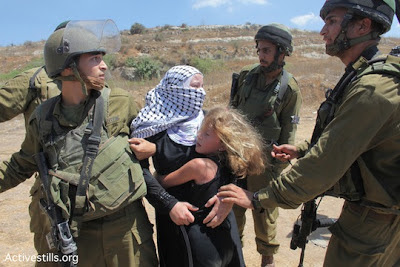 Ah'd attempting to stop the arrest of her mother, Nariman. 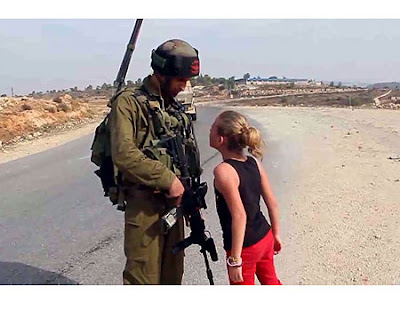