Dear friends,
on the 7th of March, a loud, vibrant protest of more than 50 people greeted Israeli war criminal Benny Gantz who was touring Australia to raise funds via the United Israel Appeal.

Gantz is the former Chief of Staff of the Israeli Military. Benny Gantz was for 38 years a career soldier in the Israeli military, rising to the IDF's top job in February 2011. Gantz led two major Israeli military offensives against the people of Gaza: 'Pillar of Defense' and 'Protective Edge'.

Operation 'Protective Edge' killed more than 2100 Palestinians and left hundreds of thousands of Gaza residents homeless. Gantz also headed Operation 'Brother’s Keeper' in the West Bank, which arrested and detained 800 Palestinians, without charge or trial, and killed another nine.

Please find below some photos from the Melbourne protest. Protests were also held in Perth and Sydney. 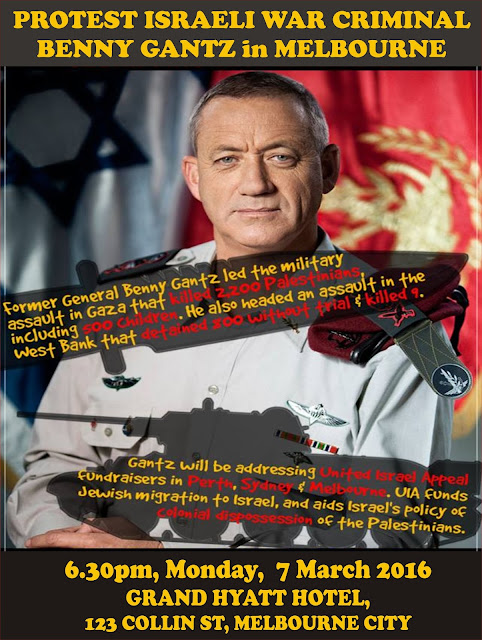 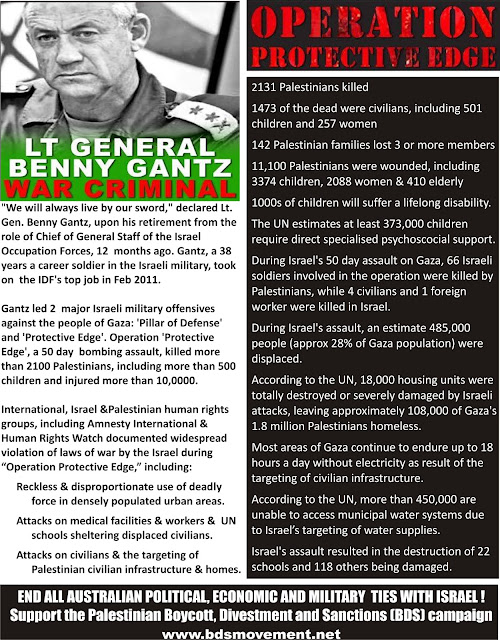 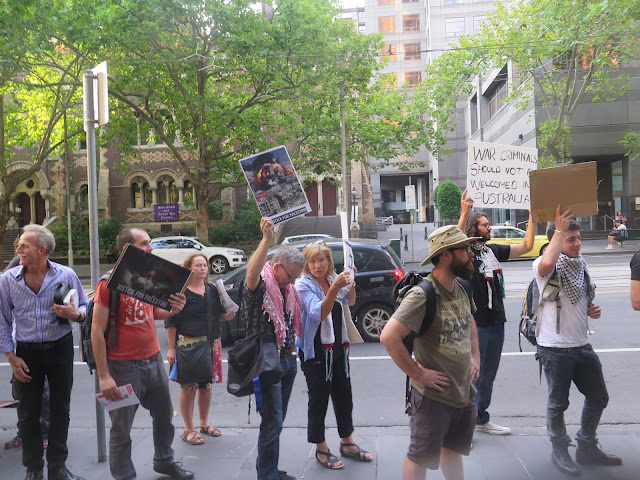 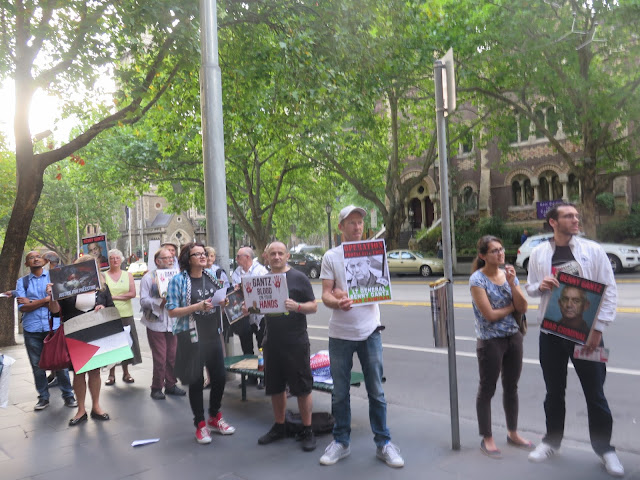 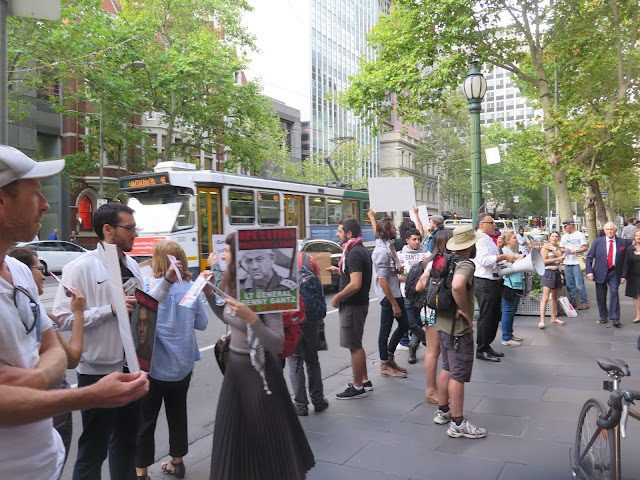 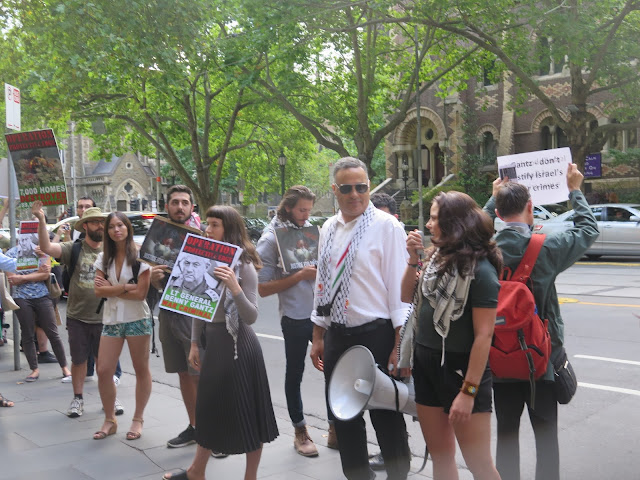 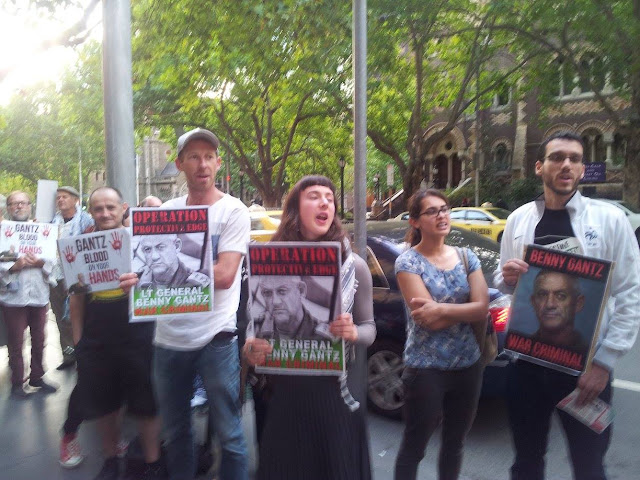 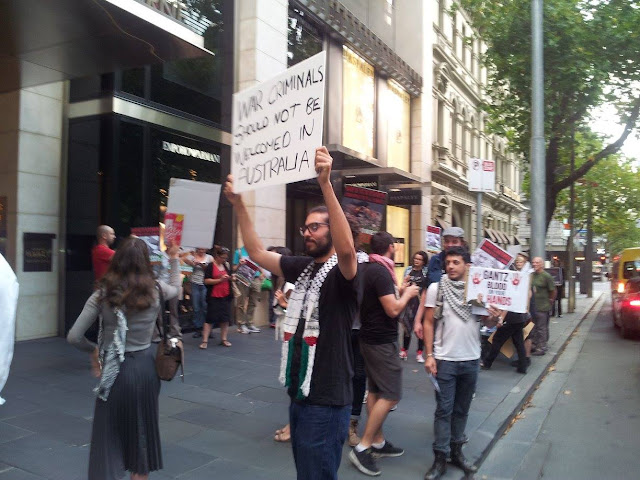 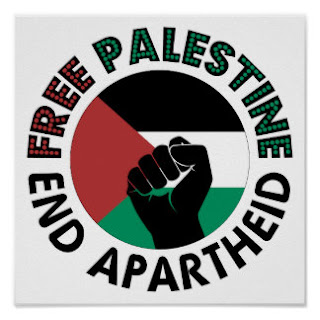 Dear friends,
I have been snowed under of late with other work, so I have not had time to post a lot up of late. Over the next week or so, I will try and post up some of the back log which I have not yet had a chance to post!

in solidarity, Kim
Posted by Kim at 7:26 PM No comments:

like many others I was shocked and saddened to hear the news of Patrick Wolfe's sudden death in February.  I first meet Patrick in 2008 or 2009 at La Trobe University, when he hosted a meeting with Israeli activist, Jeff Halper (from the Israel Committee Against House Demolitions) on the Israel and the Palestine conflict. I remember Patrick speaking at the meeting on the settler colonial nature of the Israeli state and the Zionist project.

Over the years, I ran into Patrick many times at various Palestine solidarity events. Patrick was always genuinely happy to meet others and always had a kind and supportive word to say.

Sometime in 2011, during a phone call about Palestine solidarity activism, he invited me to  his home for lunch as I said I would like sometime to pick his brain about settler-colonialism for my PhD thesis but sadly I never followed up on setting a time for the meeting, something I very much now regret.

Patrick was a giant in the field of settler-colonial studies. As I note in my tribute to him below, his work launched a major reconsideration of the role of settlement in colonisation and was at the forefront of research in his field.  Patrick was also an unapologetic supporter of Palestine and the Palestinian Boycott, Divestment and Sanctions campaign. Patrick also actively supported Aboriginal rights and the struggle for refugee rights.

Over the next couple of days, I will also post an interview with Patrick on Palestine and settler-colonialism, as well as links to some of his works.

Good bye Patrick, you will be sadly missed by all those who knew you. Patrick's passing is a loss not only for the academic world but also the Palestinian people, who have lost a dedicated champion. 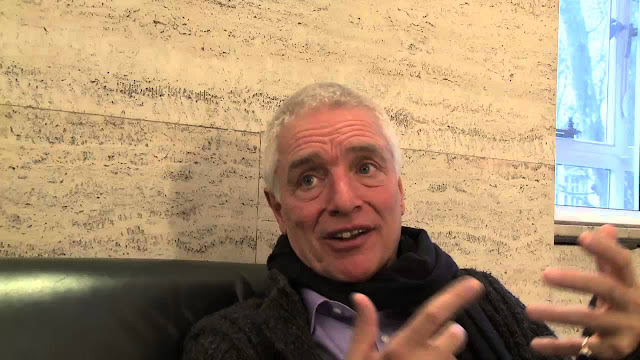 He researched and taught in Australia and internationally on race, colonialism, imperialism, genocide, the history of anthropology and Aboriginal history. His research examined race and settler colonialism in Australia, the USA, Israel, Brazil and India.

Settler colonialism and the transformation of anthropology initiated a major reassessment of the role of settlement in colonisation. This seminal study examined the European settlement and colonisation of Australia, demonstrating that the settlers operated as if the country were “empty” despite it being occupied by an indigenous population.

Wolfe explained that “invasion is a structure, not an event” and that settler colonialism is premised on the “elimination of the native”, this being achieved through either physical elimination or assimilation policies that sought to transform indigenous populations into “white people”. As he explained in a 2012 interview with Camryn Douglass of Stanford University:

Wolfe regularly spoke at and participated in Palestine solidarity activities both in Melbourne and internationally. He was a solid supporter of the boycott, divestment and sanctions (BDS) campaign, which was launched by Palestinian civil society in 2005 – a call for non-violent punitive measures to be maintained until Israel meets its international obligations and complies with international law.

He was a participant in the first national Australian BDS conference in 2010 and later lent his name, along with Noam Chomsky, John Pilger and Norman Finkelstein, to a defence letter in support of 19 activists arrested and charged over a peaceful BDS action in Melbourne.

In 2014, he joined more than 400 Middle Eastern scholars and librarians at the height of Israel’s 50-day bombing campaign of Gaza to condemn the murderous assault and to reiterate the call for the academic boycott of Israel.

With Wolfe’s passing, not only has the academic world lost a giant, but the Palestinian people have lost a dedicated champion.

[Kim Bullimore is the co-convener of the Melbourne Coalition Against Israeli Apartheid and was a co-organiser of the first Australian BDS conference in 2010. She blogs at livefromoccupiedpalestine.blogspot.com.au.]
Posted by Kim at 7:39 PM No comments: