**
Palestinians Are Fighting for Their Lives; Israel Is Fighting for the OccupationThat we notice there’s a war on only when Jews are murdered does not cancel out the fact that Palestinians are being killed all the time, and that all the time we are doing everything in our power to make their lives unbearable.
Amira Hass October 07, 2015, Haaretz 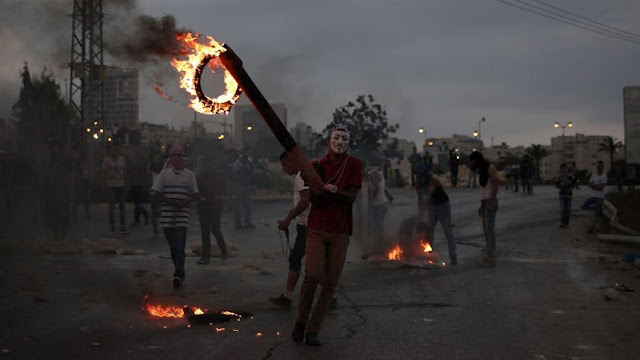 Palestinian youth burn tires during clashes with Israeli soldiers in the West Bank city of Ramallah, October 4, 2015.
Yes, this is a war, and Prime Minister Benjamin Netanyahu, with his mandate from the people, has ordered its intensification. He does not listen to Palestinian President Mahmoud Abbas’ messages of conciliation and acceptance in calmer times, why should he listen to them now?Netanyahu is intensifying the war mainly in East Jerusalem, with orgies of collective punishment. He thus further reveals Israel’s success in physically disconnecting Jerusalem from most of the Palestinian population, accenting the absence of Palestinian leadership in East Jerusalem and the weakness of the government in Ramallah — which is trying to stop the drift in the rest of the West Bank.The war did not start last Thursday, it does not start with the Jewish victims and does not end when no Jews are murdered. The Palestinians are fighting for their life, in the full sense of the word. We Israeli Jews are fighting for our privilege as a nation of masters, in the full ugliness of the term.That we notice there’s a war on only when Jews are murdered does not cancel out the fact that Palestinians are being killed all the time, and that all the time we are doing everything in our power to make their lives unbearable. Most of the time it is a unilateral war, waged by us, to get them to say “yes” to the master, thank you very much for keeping us alive in our reservations. When something in the war’s one-sidedness is disturbed, and Jews are murdered, then we pay attention.Young Palestinians do not go out to murder Jews because they are Jews, but because we are their occupiers, their torturers, their jailers, the thieves of their land and water, their exilers, the demolishers of their homes, the blockers of their horizon. Young Palestinians, vengeful and desperate, are willing to lose their lives and cause their families great pain because the enemy they face proves every day that its malice has no limits.Even the language is malicious. Jews are murdered, Palestinians are killed and die. Is that so? The problem doesn’t begin with our not being permitted to write that a soldier or police officer murdered Palestinians, at close range, when his life was not in danger, or by remote control or from a plane or a drone. But it is part of the problem. Our comprehension is captive to a retroactively censored language that distorts reality. In our language, Jews are murdered because they are Jews and Palestinians find their death and their distress, because presumably that’s what they’re looking for.Our worldview is shaped by the consistent betrayal by Israeli media outlets of their duty to report events, or their lack of the technical and the emotional ability to contain all of the details of the world war that we are conducting in order to preserve our superiority in the land between the river and the sea.Not even this newspaper has the economic resources to employ 10 reporters and fill 20 pages with reports on all the attacks in times of escalation and all the attacks of the occupation in times of calm, from shooting through building a road that destroys a village to legalizing a settlement outpost and a million more assaults. Every day. The random examples we do manage to report are but a drop in the ocean, and they have no impact on the comprehension of the situation for a large majority of Israelis.The goal of this unilateral war is to force the Palestinians to give up all their national demands in their homeland. Netanyahu wants escalation because experience so far has proved that the periods of calm after the bleeding return us not to the starting line, but rather to a new low in the Palestinian political system, and adds privileges to the Jews in Greater Israel.Privileges are the chief factor that distorts our understanding of our reality, blinding us. Because of them, we fail to comprehend that even with weak, “present-absent” leadership, the Palestinian people — scattered in its Indian reservations — will not give up and will continue to find the strength necessary to resist our malicious mastership.
Posted by Kim at 11:51 PM