Dear friends,
please find below my lastest article published by RedFlag last week.  Israel has carried out repeated attacks on Haram al Sharif /Al Aqsa Mosque Compound over the last couple of weeks.  As I note in the article, it is a myth that there is a religious war taking place in East Jerusalem. Instead, the attacks on Al Aqsa Mosque Compound are simply part of Israel's ongoing settler-colonialism and long held policy of seeking to ethnic cleansing of Occupied East Jerusalem. In the article, I mention two videos relating to the attacks on Al Aqsa Compound. I have included them below.

Since writing this article, Israel has continued to carry out attacks on Haram al Sharif /Al Aqsa Mosque Compound, resulting in an escalation in violence in both Occupied East Jerusalem and the Occupied West Bank.  In the last few days, Israel has shot several children, with one child losing their leg as a result.  In the wake of Israel's repeated attacks on Al Aqsa, two Israeli settlers have also been shot dead in the Occupied West Bank.  Israel is currently carrying out widespread raids and tensions are continuing to grow. I intend to post updates about the situation in the Occupied West Bank and East Jerusalem over the next couple of days.

Temple Mount Institute: Priestly Blessing on Temple Mount
Text accompanying video: "On Sunday, September 13, the eve of Rosh HaShana, among the many Jews who ascended the Temple Mount in preparation for the new year, was Israel's Minister of Agriculture, Uri Ariel. Uri Ariel, a kohen, (descendant of the Temple priests via the lineage of Aharon), has made many trips to the Temple Mount. On Sunday he recorded this New Year's greeting from the Temple Mount" 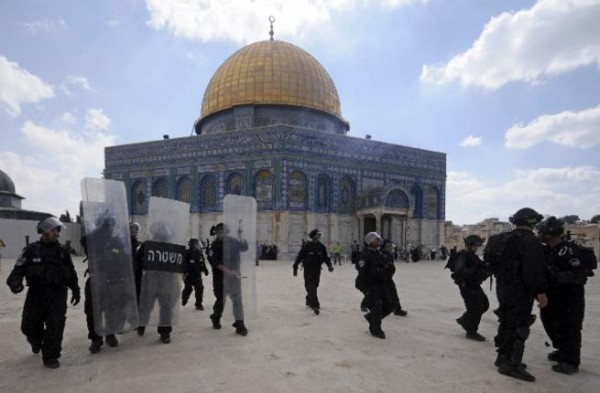 Israel launched a three-day assault on the Al Aqsa Mosque compound in Jerusalem on 13 September, causing widespread destruction and injuries.

The international media have uncritically reported Israel’s claim that the assault was carried out in order to thwart Palestinian attacks on Jews. In reality, the storming of the compound coincided with the Jewish New Year (Rosh Hashanah) and was designed to facilitate access to the site by Israeli settlers and extremists, led by Israel’s agriculture minister, Uri Ariel.

A video published by the Temple Mount Institute shows Ariel standing in front of the Dome of the Rock on the first day of the assault. He is surrounded by Israeli military and police, imparting a “priestly blessing” on the people of Israel as if nothing was amiss.

A member of Naftali Bennet’s Jewish Home party, Ariel is a prominent figure in the Temple Mount movement, which calls for the destruction of the Muslim holy site and the construction of a Jewish temple in its place.

In 2013, Ariel staged a similar visit during Rosh Hashanah, stating “the Temple Mount is ours” and that his aim was to “strengthen the state of Israel’s sovereignty on the site”. In November 2014, speaking to right wing Israeli radio station Kol Berema, he again called for the building a Jewish temple in the Al Aqsa compound. In July this year, more than 150 Israeli police stormed the compound to facilitate the entry of Ariel and 70 other illegal Israeli settlers to the site.

The Al Aqsa Mosque compound, known in Arabic as Haram al Sharif (the Noble Sanctuary) and in Hebrew as Har HaBayit (the Temple Mount), is considered to be the third holiest site in Islam and the holiest in Judaism.

But this is not primarily a religious conflict. The violent religious zealotry espoused by Ariel and his fellow extremists is a cover for Israel’s ongoing settler colonialism and its attempts to ethnically cleanse occupied East Jerusalem.

As a briefing paper issued in February by Palestinian policy network al-Shabaka notes, the so-called “religious war” taking place is a myth, one which “ignores the reality of the power imbalance between the coloniser and the colonised” and “fails to address the history and context in which the recent events have unfolded”.

Since seizing control of East Jerusalem (along with the West Bank and Gaza) in 1967, Israel has crafted a range of laws and policies that both increase its geographic control over the territory and disenfranchise and expel Palestinian residents.

According to al-Shabaka, the aim of both the Israeli state and the Temple Mount movement is to “Judaise” occupied East Jerusalem, noting that “Judaisation has been accompanied by ‘de-Palestinianisation’ to eradicate the Palestinian identity in Jerusalem”.

This included the razing of entire Palestinian neighbourhoods in 1967, such as al-Magharabeh and Harat al Sharaf, in order to construct the Western Wall Plaza and housing for Israeli settlers.

Since 2002, with the construction of the apartheid wall, Israel has sought to change the demographic make-up of the territory by cutting East Jerusalem off from Palestinian population centres in the West Bank.

In recent days, the Jerusalem City Council renamed more than 30 streets with names based on the Torah, erasing previously existing Arab names and locations. One Palestinian resident told Israeli news service Walla!, “This is all part of one plan – first, to Judaise al-Aqsa, second, the Arab villages, third, the history and names”.

Israeli prime minister Benjamin Netanyahu said that Israel would continue to maintain the “status quo” (which allows Jews to visit the compound but not pray inside it) that has been in place since 1967. But according to a 2013 report, the Israeli state is supporting the Zionist settler and extremist groups that have declared their intention to “change the status quo”.

The report, issued by the Israeli group Ir Amim (City of Nations), noted that “the Jerusalem Municipality and other government ministries directly fund and support various activist organisations driven by the mission to rebuild the temple”.

Netanyahu has now vowed to clamp down on Palestinians who resist attempts by right wing groups to seize control of the compound, and has authorised the use of live fire against protesters.
Posted by Kim at 4:52 PM