Invasion Day: Nothing to Celebrate. 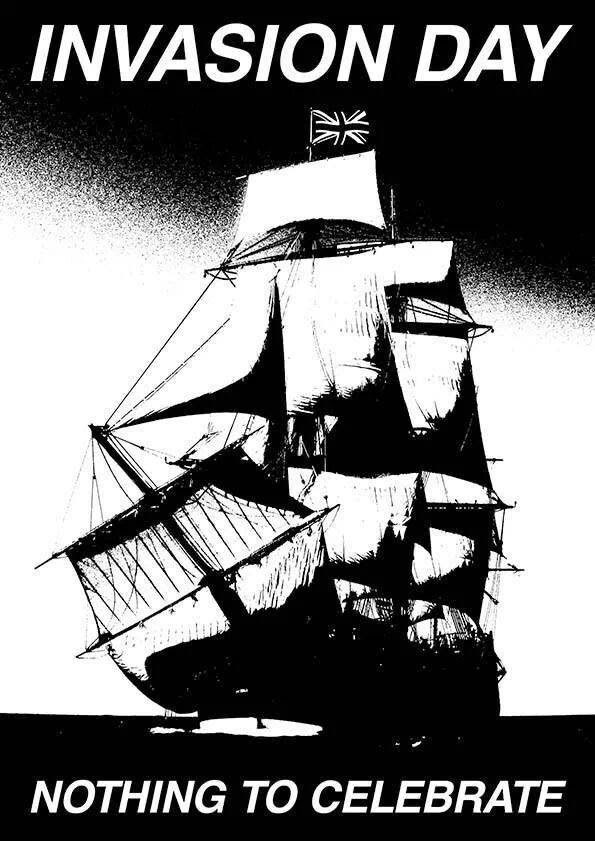 Dear friends,
as you will be well aware, this blog is primarily dedicated to providing updates, news and information about Palestine.  I do occasionally post on other issues in the Middle East.  Today, my post is specifically about Australia and the 226th anniversary of the European colonisation and ethnic cleansing of this country.

Among other things, one of the reasons, I became active in the Palestine solidarity campaign was because I saw the similarities between the Indigenous struggle of the Palestinian people and the struggle of Indigenous Australians.  Coming from a family of mixed heritage (my mother is Aboriginal and my father comes from a mixed European background), my first engagement with political activism was around Aboriginal and Indigenous rights and the struggle for land rights and justice in this country.

Today, the 26th January, is marked officially as "Australia Day", however, to Aboriginals and Torres Strait Islanders (the Indigenous people of Australia), the day is known as Invasion Day and/or Survival Day.  On this day, we commemorate and remember the struggle of Indigenous Australians against colonisation, dispossession and injustice and continue to mark the fact that the struggle for Indigenous Australian rights continues in this country.

In 2012, I wrote a longer post on this issue, which you can read here.  It discusses in more detail the history of Aboriginal resistance to European colonisation in Australia.    As I noted in my 2012 post:


Aboriginal Australians have been no different from the Palestinians in fighting back against ethnic cleansing and settler-colonisation. Our people actually carried out an extensive armed resistance to European settler colonialism. This resistance began the moment Cook set foot on Australian soil in 1770 – the Gweagal people attacked Cook’s landing party with spears and woomeras. From that moment on Aboriginal resistance never ceased.

This week in Melbourne, Aboriginal resistance to invasion hit the headlines once again when for the second year in a row, the cabin of James Cook (the British sailor credited with "discovering" Australia) was grafittied, drawing attention to the fact that January 26th is not a day of celebration for the Indigenous population of this country.  During the week in Sydney, around the area where Cook first landed, graffiti also appeared noting that Australia was built on the genocide of the Indigenous population. 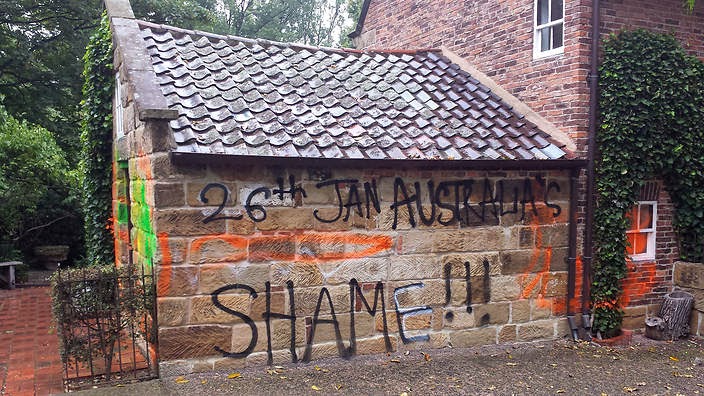 Predictably the graffiti caused outrage in the majority of the mainstream media and among many non-Indigenous Australians, all of whom were more concerned about some paint on a few bricks than the fact that a genocidal invasion had occurred in order to establish European colonies in this country. One of the better reports appeared on the Australian public multicultural broadcaster, SBS. You can read the report here.

When my friend, the comedian Aamer Rahman, tweeted congratulations to whoever graffitied Cook's cabin on twitter, he was inundated with a barrage of racist comments and threats, quickly revealing the racist underbelly that exists in Australia.


This of course comes as no surprise to many of us engaged in anti-racism campaigning in Australia. A study done in 2012 found that Australians engaged in nationalist activities, such as flag waving on Australia were more likely to be racist.  According to the study: "People who had flags on their cars, 43 per cent of them believe the White Australia Policy had saved Australia from problems that other countries had experienced".  WA University anthropologist Farida Fozdar who carried out the study noted that: "There were a lot of people who felt negative towards Muslim Australians particularly and towards asylum seekers particularly."


Today, on Invasion Day while we remember that "white Australia has a black history" and commemorate the resistance of the Indigenous Australians and the survival of Aboriginal and Torres Strait Islanders and our cultures, it is also important that we stand in solidarity with refugees who are being incarcerated by the repeated Australian governments (including the Rudd, Gillard and Abbott govts) in hell holes on Manus Island and Nauru.

Australia now has one of the most draconian and cruel refugee and asylum seeker policies in the world (Israel, it should be said, probably has the second most draconian and cruel refugee policy).  Every day in Australia, we hear of some new atrocity or some new human rights abuse or some new humiliation of refugees and asylum seekers, responsibility for which lay at the feet of the current Australian Prime Minister Tony Abbott and his Immigration Minister, Scott Morrison.

I am proud to say that many Aboriginal activists have been at the forefront of the campaign in support of refugees and asylum seekers, because as Robbie Thorpe notes in the video below Aboriginal and Torres Strait Islanders have also born the brunt of racism.

Today, on Invasion Day, a salute to all those who have resisted and continue to resist!