Always was, Always will be Aboriginal Land: commemorating Invasion Day in Australia 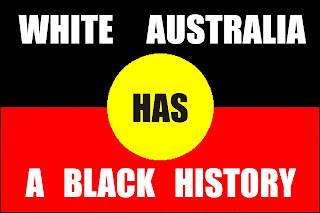 Dear friends,
as you will be well aware, this blog is primarily dedicated to providing updates, news and information about Palestine.  I do occasionally post on other issues in the Middle East.  Today, my post is specifically about Australia and the 224th anniversary of the European colonisation and ethnic cleansing of this country.

One of the reasons, I became active in the Palestine solidarity campaign was because I saw the similarities between the Indigenous struggle of the Palestinian people and the struggle of Indigenous Australians.  Coming from a family of mixed heritage (my mother is Aboriginal and my father comes from a mixed European background), my first engagement with political activism was around Aboriginal and Indigenous rights and the struggle for land rights and justice in this country.

Today, the 26th January, is marked officially as "Australia Day", however, to Aboriginals and Torres Strait Islanders (the Indigenous people of Australia), the day is known as Invasion Day and/or Survival Day.  On this day, we commemorate and remember the struggle of Indigenous Australians against colonisation, dispossession and injustice and continue to mark the fact that the struggle for Indigenous Australian rights continues in this country.

Aboriginal Australians have been no different from the Palestinians in fighting back against ethnic cleansing and settler-colonisation. Our people actually carried out an extensive armed resistance to European settler colonialism. This resistance began the moment Cook set foot on Australian soil in 1770 – the Gweagal people attacked Cook’s landing party with spears and woomeras. From that moment on Aboriginal resistance never ceased.

When Phillip arrived in Australia in 1788, Aboriginals continued their resistance – lead by warriors like Pemulwuy (Eorua people), in Western Australia an armed resistance was led by Noongar warriors Yagan, Calyute and Weeip.   In Tasmania, Aboriginals waged years of resistance against settler-colonisation.  The Aboriginal resistance during this period was intensive, as was the colonial repression.  From1828 - 1832, the colonial forces implemented martial law and at the end of this period only a small number of  Tasmanian Aboriginals remained alive, the majority of them killed by the colonisers.

In Queensland, the Kalkadoon people similarly waged an armed struggle against the Queensland police and settler-colonialists in the 1870s and 1880s. The Kalkadoon’s land ran from Mount Isa to Conclurry, and they were re-known for being fierce warriors. As soon as European settlers began their land grab of Kalkadoon land, they were met with a fierce resistance from the Kalkadoon. The Kalkadoon actually formed disciplined units, armed with stone clubs and razor sharp stone pointed spears,and engaged in guerrilla warfare against the European settlers and police in the region. After the police massacred many of the Kalkadoon women and children in retaliation for the killing of the settler-invaders, the Kalkadoon took a stand in an area known as Battle Mountain in 1884.

After initially having the upper-hand in the battle, the Kalkadoon were defeated due to the invaders superior modern weaponry. More than 200 of their warriors killed during the battle, breaking the back of the Kalkadoon resistance. Modern studies estimate more than 900 Kalkadoon lost their lives in battle or died from arsenic laced flour, blankets infect with the measles and poisoned water holes.

By the 1900s Aboriginal armed resistance to European invasion had come to an end, however, this did not mean the end of Aboriginal resistance.

When the Israeli Knesset passed the Nakba bill in an attempt to prevent Palestinians commemorating the Nakba (the catastrophe) and the ethnic cleansing of their people by Zionist settler-colonial forces, the Israeli right-wingers such as Danny Aylon claimed that there was no other country in the world which would "standy by while its celebrations of independence are turned into a memorial service".

Aylon clearly either didn't know or chose to ignore the fact that in Australia, Aboriginal Australians have since the first official "Australia Day" in 1938 marked it as a day of mourning, resistance and struggle.

Prior to 1938, the individual states had marked the day as a celebration of European colonisation on state level not at a national level.  In 1934, the NSW state government marked the day by  re-enacting Captain Phillips' arrival and flag-raising at Sydney Cove and by staging a parade.   As part of the day, 120 motorised floats, stretching 1.5 miles, took one and a half half hours to pass through the streets of Sydney.   The theme of the parade was "March to Nationhood".

The organisers of the event to try and create some sort of bizarre authenticity brought in 26 Aboriginal people from Menindee, a settlement of Wiradjuri and Barkendjii people on the River Darling, and from Brewarrina east of Bourke (the Murawari people) to act out Aboriginal resistance to the British landing, and to pose on the first float in the parade.

That day, there were also other Aboriginal people at the proceedings, including Aboriginal activist,  William Cooper,  founder of the Australian Aborigines' League in Victoria in 1936, as well as  Jack Patten, Bill Ferguson and Pearl Gibbs who was the head of the  Aborigines' Progressive Association. For these Aboriginal leaders and activists, Australia Day was a "day of mourning" 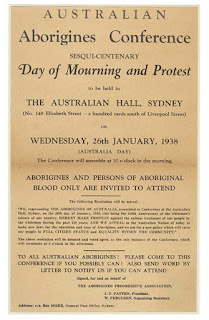 The statement called for Aboriginal people to be able to access the same citizenship rights as those of white-Australians - something that would not be granted until 1967 (for more information click here).

The conference also called for Aboriginal land rights, equal employment opportunity, improvement in standards of health, housing and education.  The conference also took a stand against the government sanction stealing of Indigenous children (for more information click here).  In addition, the conference argued for the termination of the Aboriginal Protection Board and the dumping of the Aborigines Protection Act 1901-1936 (NSW) which restricted controlled all aspects of Aboriginal life, from marriage to employment. 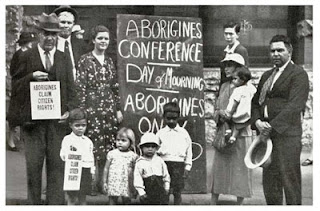 Over the next 35 years Aboriginal resistance continued. You can read more about it here in an article I wroted in 2001 - click here to read.

In 1972, the then Prime Minister, Billy McMahon government in response to an Indigenous land rights claim by the Yirrakala people issues a  White Paper on January 25, 1972 declaring that it was in the "national interest" and the interest of Aboriginal people themselves that mining exploration on Aboriginal reserves should continue.  The Indigenous response was immediate. Four Aboriginal activists, with the aid of the Communist Party of Australia, traveled to Canberra to establish the tent embassy in protest. Soon Aborigines came from all over the country to help staff the embassy. The Aboriginal Tent Embassy protesters put forward a number of key demands, including calling for Aboriginal legal title to and control of mining rights on existing reserve lands and settlements throughout Australia; the preservation of all sacred sites throughout Australia; compensation monies for land not returnable, in the form of a down payment of $6 billion and an annual percentage of gross national income.

The embassy formed alliances with anyone — black or white — who supported the call for indigenous rights.
It was the tent embassy's reliance on Aboriginal self-organisation and direct public protest action which resulted in thousand of Australians  marching in Canberra and around the country in support of Aboriginal rights.

I have included below the film "Tent Embassy" (in four parts) below which outlines the history of the Tent Embassy and some footage taken from Ningla A-Na (Hungry for our Land) (1972), a film documenting Black activism in Australia in the 1970s, in particular the Tent Embassy.

Today we once again remember that "White Australia has a Black History" and we remember once again today and always that  the land on which today's Australia stands: "Always was, Always will be Aboriginal Land"