Dear friends,
on Wednesday (Palestinian time), more than 100 Palestinian activists joined by international and Israeli activists staged a BDS action in the Occupied West Bank. The action was held at the entrance of an Israeli supermarket in an illegal Israeli settlement, just north of Ramallah.

The Israeli Occupation Forces brutally attacked the demonstration and four Palestinian activists were arrested, including my good friend Bassem Tamimi, who is one of the leaders of the Nabi Saleh Popular Committee against the Occupation. Bassem recently spent 13 months in prison for the "crime" of organising non-violent, unarmed demonstrations in his village against the continued stealing of village land by the illegal Israeli settlement of Halamish and against Israel's ongoing occupation.

According to the latest reports from Nabi Saleh, Bassem and the other activists are currently being held in Ofer military prison and will be brought before a military occupation court tomorrow. According to the reports his medical condition is not as severe as first thought (the PSCC report states that he received broken ribs. It has not been clarified if his ribs were broken or not but simply it was not as bad as first thought).

I have included below the media release issued by Popular Struggle Coordination Committee on the action and photos from ActiveStills, Tamimi Press and from other activists at the protest.


Also included below is a video of the action by Nabi Saleh videographer, Bilal Tamimi from Tamimi Press.

You can also watch (click here) a video I made last year about the struggle in Nabi Saleh, which includes interviews with both Bassem and Naji Tamimi, who were both arrested shortly after this video was made. Naji, who is also a good friend, also spent a year in prison also for the "crime" of opposing Israel's occupation.

Rami Levi BDS protest. Video by Israel Puterman
[For some reason I couldn't link the original video from youtube here.
You can access the original on Youtube here ]
***

Press release
Wednesday, October 24, 2012
Palestinian activists protest at Rami Levi settlement’s supermarket
Activists called for the boycott of occupation and its products. Four activists were detained and several injuries due to soldiers’ brutality.

This morning, more than 100 Palestinians, joined by number of international activists staged an action protest at the entrance of Rami Levi’s supermarket in Sha’ar Benjamin settlement north of Ramallah, to protest occupation and settler terror. They entered the market and walked up and down the aisles chanting for freedom and waving Palestinians flags.

As activists exited the building, about forty policemen and soldiers were waiting outside, they attacked physically the demonstrators and fired stun grenades at them, causing several injuries, two of which were taken by ambulance to the hospital.Four people, including Basim Tamimi, the head of the Popular Committee of Nabi Saleh, were beaten and arrested by Israeli police. Tamimi’s ribs were broken and several Palestinians were injured.

Protesters called for the boycott of occupation and all its products, and stressed that “as long as there is no justice to Palestinians, Israeli and settler daily life can’t continue on as normal.”

Two of those arrested were Palestinians including Bassem Tamimi in addition to two international activists, an American and Polish.


The protest was part of Popular Struggle Committees’ actions to protest the occupation and settlers terror against Palestinians. Last week about 50 Palestinian activists blocked the Apartheid Road 443 (known as Modi’in, which passes on West Bank lands, connecting Tel Aviv to Jerusalem). The road was blocked for about 30 minutes to Israeli and settler traffic.
-- 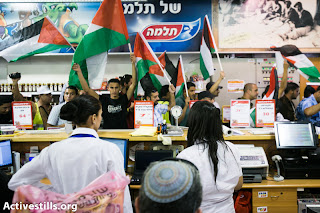 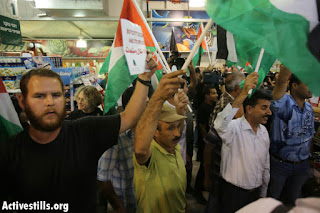 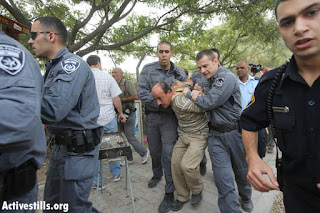 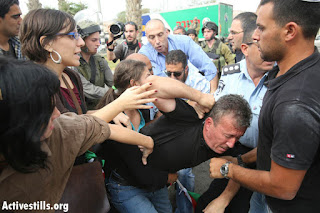 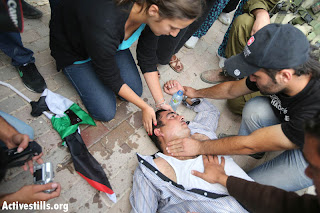 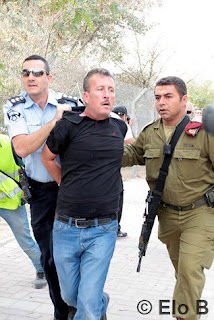 Photo by Elo B 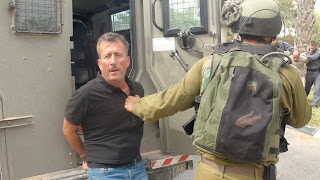 Photo by Tamimi Press
Posted by Kim at 7:25 PM