Nakba and Survival VS Benny Morris

Dear friends,
a review in Haaretz of Adel Manna's new book, Nakba and Survival and a response to Benny Morris's criticism of the book.

For the Nakba, There's No Need of an 'Expulsion Policy'

In contrast to what Benny Morris claimed, Adel Manna's 'Nakba and Survival' is an inspiring book, noteworthy for its methodical approach in presenting a credible, multifaceted history of the Palestinian tragedy of 1948 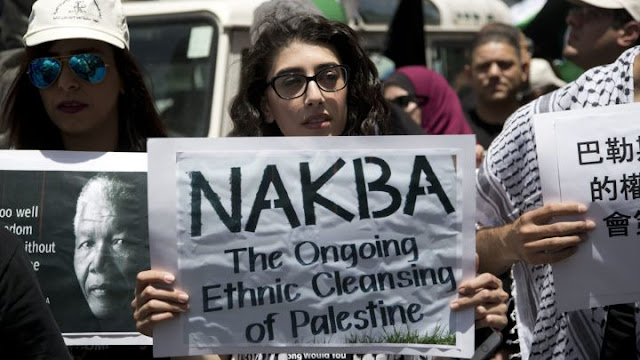 Benny Morris’ criticism of Adel Manna’s important book “Nakba and Survival: The Story of the Palestinians Who Remained in Haifa and the Galilee, 1948-1956” (“Israel had no ‘expulsion policy’ against the Palestinians in 1948,” July 29)  is part of the historian's efforts – which have continued for over 15 years – to deny what he once claimed in the past: that Israel carried out ethnic cleansing for all intents and purposes in Israel's 1948 War of Independence. (“Nakba,” meaning "catastrophe," is the term used by Arabs to describe the war, when more than 700,000 Arabs fled or were expelled from their homes over a period of about two years.)

In the past Morris stated this with commendable courage. In a debate with Israeli author Aharon Megged on the pages of Haaretz in 1994, he declared: “The new corpus of facts that have been revealed in documents (for example: details that had been concealed regarding acts of slaughter, expulsion and expropriation carried out by the Hebrew defense forces in 1948 and in the following years) have given rise to a different interpretation of the Zionist enterprise Zionism’s principal aspiration was to solve the problems of the Jewish people in the Diaspora, to establish a political entity that would be a refuge for the Jews and an exemplary country. 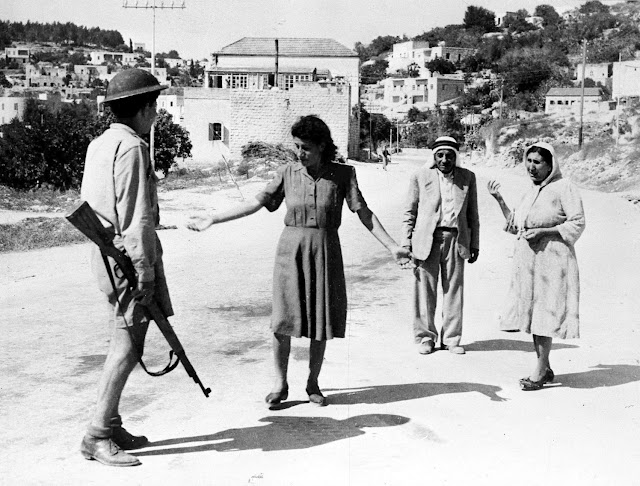 An Israeli soldier, armed with a rifle, stop some Palestinian Arabs in a street in Nazareth, Palestine, July 17, 1948, as they are travelling after the allotted curfew time

“But," Morris continued, "Zionism also had other objectives: to take control of the Land of Israel from the sea to the river to replace the Palestinians who lived there: to push them out of the country at the moment of decision the defense forces of the Zionist movement gave expression to the belligerent and expansionist urge that was always at the basis of Zionist ideology, and made sure – whether by means of making them flee and expulsion, or by preventing the return of refugees – to push outside the borders of the state-in-the-making the vast majority of Arabs who lived in the areas that became the State of Israel, and also to enlarge the state beyond the lines drawn in the 1947 UN General Assembly resolution.”

The Benny Morris of 1994 did a better job of explaining what Dr. Manna asserts in his book. But in recent years Morris has been trying to “correct a mistake” and to prove that what he concluded from his research about the expulsion of the Palestinians was actually incorrect. I don’t know what made him change his conclusions regarding the catastrophe that Israel inflicted on the Palestinian people in 1948. What is worse is the fact that Morris wickedly criticizes research that is attempting, in a balanced and critical manner, to deal with the Nakba and its outcome from an angle that doesn’t suit the Zionist narrative – a narrative that Morris also attacked harshly in the past due to its ideological biases.

Morris asserts in his review that, “Concerning the 1947-1949 war, Manna’s story is simple: The Jews uprooted the Arabs from their locales and also did so in the years after the war; a conflict between two national movements, each of them with legitimate claims, did not happen; and, in fact, there was hardly even a war: There was just an uprooting and nothing else.” But isn’t this assertion similar to what he himself said 23 years ago? 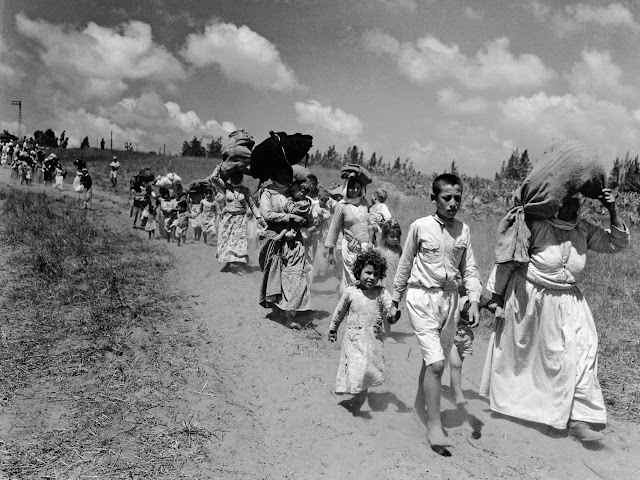 
Manna, as opposed to several of his critics, is fluent in Arabic, Hebrew and English, which is why, for example, he can not only read and examine official documents of the Haganah (the pre-state Jewish fighting force), but can also survey the Arabic press and other Arabic sources. In other words, as opposed to Morris, whose research is based mainly on official documents from Israeli and British archives, Manna presents a complex and more credible picture of the Palestinian tragedy.

Morris’ tendentiousness is also clear, for example, in his criticism of Manna regarding the interviews he gathered from survivors of the Nakba, who are now elderly men and women. How is it possible, complains Morris, that after so many years people remember what really happened? According to Morris, “Throughout ‘Nakba and Survival,’ Manna ‘shows’ that what people remember 40 or 50 years after the fact is congruent with what is related in the documentation that has come down to us from those years (this, contrary to my own admittedly not very vast experience to the effect that usually there is no such congruence, or else the interviewees simply did not remember anything).”

In other words, according to Morris, what’s really important in order to understand “what really happened,” is what he found in the Israeli or British archives. Strange, since in a review he wrote in the Haaretz Hebrew edition (“These refugees have nowhere to return to,” November 24, 1992) on an encyclopedic collection published by the Institute for Palestine Studies about Palestinian villages that were erased from the map in 1948, he thought differently: “The authors didn’t interview refugees (and in a few years from now none will remain),” he claimed.

Benny Morris still believes that the role of the historian is no more than to tell his readers what he found in an official archive and in documents issued by some government organization or other. Had the study of the Holocaust, for example, continued to be based on a similar approach – as indeed was the case in German historiography in the 1970s – we would know almost nothing about the Jews’ lives and their efforts to survive during the years of their great tragedy, as we now know thanks to the many testimonies from the survivors themselves.

PHOTO: The cover of 'Nakba and Survival: The Story of the Palestinians Who Remained in Haifa and the Galilee, 1948-1956.' 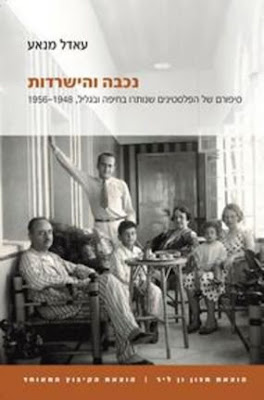 And that’s actually what Manna does: He brings the story of his people’s national tragedy from the point of view of the victim, of the survivor. Israel’s policy on the Palestinian issue and the policy of expulsion are not at the heart of the book: The story of the expulsion and of the survival is what's found there.

On the issue of the expulsion Morris also squirms in an effort to distance himself from his former self. But here he steps on a land mine: Serious researchers of the phenomenon of mass violence don’t have to find unequivocal proof of the existence of “a policy of expulsion” in order to reach the conclusion that crimes against humanity were committed. He asserts that there was no such policy, and if there were directives issued to carry out massacres in Palestinian villages they were conveyed, he says, “by (vague) order.”

One would think that when the Ottomans decided to expel the Armenians in 1915 they published it in the official press, or when Ratko Mladic decided to slaughter over 7,000 Bosnian Muslim men and boys in Srebrenica in 1995, he made his orders public. Orders and instructions to carry out such crimes are given orally, in closed discussions, and by implication, in ambiguous language. That doesn’t mean that those who carry them out don’t know exactly what is intended by the person who gives those evasive orders.

Morris finds the ultimate proof for the weakness of Manna’s claim regarding the expulsions in the fact that at the end of the war, 160,000 Arabs remained inside Israel. Is that expulsion? If there was a policy of expulsion, he asks, how is it possible that so many Palestinians remained? That reminds me of what Holocaust deniers wrote already in the first years after World War II. A final solution? What are you talking about? How is it possible that hundreds of thousands of Jews remained in all kinds of European countries, and millions in the Soviet Union? Perhaps, those anti-Semites claimed, several hundreds of thousands died from the harsh conditions in various places – but ... gas chambers and mass murder?

Of course, no research is free of errors and imprecise assertions. That’s also true of Manna’s research, and Morris mentions some of them. But Manna’s book is an important contribution to the study of the Palestinian tragedy, and mainly, a rare opportunity for the Jewish reader to understand the human aspect of the great catastrophe that the national independence of his people inflicted upon members of the nation that lived in this country for many years before that. 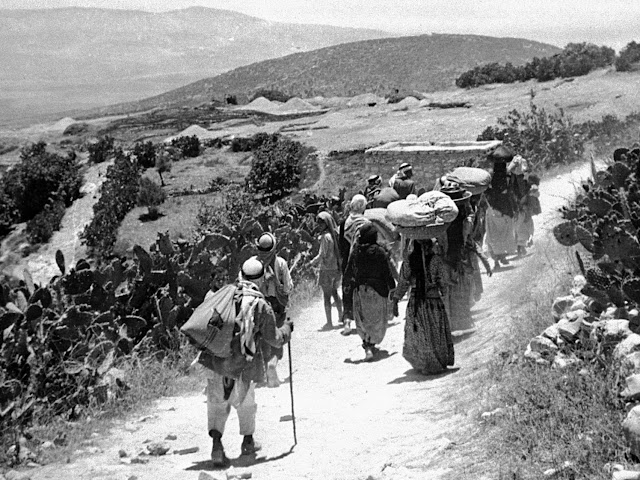 Palestinian refugees returning to their village after its surrender during the 1948 Arab-Israeli war.
Posted by Kim at 1:13 AM