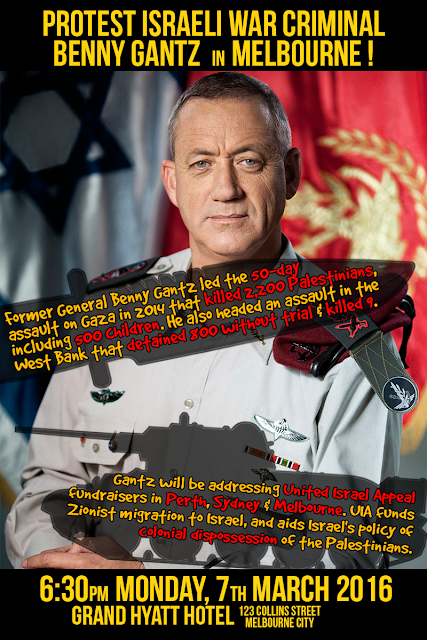 "We will always live by our sword," declared Lt. Gen. Benny Gantz, upon his retirement from the role of Chief of General Staff of the Israel Occupation Forces, twelve months ago.

Gantz should know. For 38 years a career soldier in the Israeli military, he rose to the IDF's top job in February 2011. Gantz led two major Israeli military offensives against the people of Gaza: 'Pillar of Defense' and 'Protective Edge'. Operation 'Protective Edge' killed 2,200 Palestinians, including 500 children, and left tens of thousands of Gaza residents homeless.
Gantz also headed Operation 'Brother’s Keeper' in the West Bank, which arrested and detained 800 Palestinians, without charge or trial, and killed another nine.

Let's give the General the welcome he deserves!