Dear friends,
please find below my latest article published by Red Flag on the ongoing protests in Occupied East Jerusalem, Israel's extrajudicial execution of two Palestinian men and the recent violence by the  Zionist state, which has left two Palestinian children seriously injured.

Young Palestinians use doors as a shield during clashes with Israeli security forces in the Shuafat refugee camp east Jerusalem PHOTO: AFP

On 14 November, 10-year-old Mayar al-Natsheh’s skull was fractured when troops fired on the car she was in at a checkpoint near Shufat refugee camp.

A day earlier, Israeli police shot 11-year-old Saleh Mahmoud in the face, at close range, with a “sponge” bullet – high density plastic with a sponge tip fired from a grenade launcher. He was blinded in his left eye, and the vision in his right eye has been severely impaired.

At the time of the shooting, residents of al-Issawiya were protesting the closure of three of the four entrances to their village for more than 11 days.

East Jerusalem has been a tinderbox since the brutal torture and murder of 16-year-old Mohammed Abu Khdeir by Israeli settlers on 2 July. Abu Khdeir was forced to drink gasoline before being burnt alive.

Israel’s brutal 50-day bombardment of Gaza only added to the outrage.

The Palestinian Arab residents of East Jerusalem have been staging continuous protests against Israel’s atrocities and the ongoing occupation. Viewed as a fifth column and a “demographic time bomb” – a threat to Jewish dominance in Israel – Palestinians face systemic discrimination on all levels, in both the occupied territories and the Israeli state.

Discontent has been further inflamed as a result of Israel restricting access to the Al-Aqsa mosque and attempts by Israeli settlers to gain control of the Temple Mount, where the mosque is located. The settlers, who have the support of both government officials and Israeli police, have been agitating for the destruction of the mosque, one of Islam’s holiest sites.

The rising tensions resulted in an attempt to assassinate dual US-Israel citizen Yehuda Glick, the illegal settler at the forefront of the campaign to destroy the mosque. Israeli police later assassinated a Palestinian man, Moataz Hejazi, who they claimed was responsible for the shooting of Glick.

A week after the extrajudicial execution of Hejazi, Israeli police executed 22-year-old Kheir al-Dein Hamdan in Kafra Kana. The following day, 8 November, a general strike was widely observed throughout Palestinian communities inside Israel, and Palestinian youth took to the streets.

In statement issued on 9 November, Adalah, the Legal Centre for Arab Minority Rights, noted that the killing was captured on a nearby CCTV camera and clearly showed an execution. Hamdan “did not pose any immediate threat to the lives of the police officers when they shot him down”, Adalah said, adding that “the police narrative was false and fabricated”.

The centre also noted a direct connection between the execution of Hamdan and the statements made the previous week by public security minister Yitzhak Aharonovich, who had said that anyone attacking Israeli Jewish citizens should be killed.

In response to the escalating protests in East Jerusalem, prime minister Netanyahu’s cabinet approved a law change that would increase the maximum penalty for stone throwing to 20 years in prison. According to the Jerusalem Post, Netanyahu told his cabinet: “Israel is acting firmly against terrorists, rock-throwers, against firebomb throwers and against those who use fireworks.”

Israel’s most read Hebrew daily, Yedioth Ahronoth, on 5 November outlined Netanyahu’s hardline approach to the East Jerusalem protests. The paper quoted Israel Security Agency head Yoram Cohen as saying that Netanyahu is “strongly convinced by the effectiveness of [collective] punishments: the imposition of prison sentences and fines for parents whose children throw stones, the demolition of houses, deportation to the Gaza Strip, the collection of taxes by force”.

All of these measures are breaches of international law.
Share this article:

Please find below a media release issues by the activists about the action and also some photos.

In light of the unprecedented Israeli occupation’s daily attacks and colonial aggression against the Palestinian people, and due to the tightening of the closure around Jerusalem, the capital of Palestine, and its people. In addition to the actions of aggression and violations committed by the illegal colonial settlers who are trying to control Muslim and Christian holy sites in Jerusalem through targeting, displacing, killing and arresting Jerusalem’s Palestinian residents. We, Palestinians, decided to rise in our masses to confront the occupation at the points of closure around the city of Jerusalem, against the siege of the holy city and its people.

Palestinians in the West bank are banned from reaching Jerusalem by the Israeli occupation’s checkpoints and apartheid wall. Our will, determination and in response to the pleas of our people in Jerusalem we decided to resist. Jerusalem is our motivation, its what moves us and motivates our struggle for our just cause. We have committed ourselves to struggle against the occupation and will not remain silent after this day.

‘On to Jerusalem’ is an action that was initiated to resist the occupation and its measures, against its checkpoints, which violate our right to freedom of movement between our cities within the West Bank and to Gaza. The colonial occupation imposes measures that prohibit us from reaching our holy sites. For tens of years, Palestinians Christians and Muslims have been prohibited from reaching and visiting their churches and mosques in Jerusalem.

Today, we Palestinians, in our hundreds, we participate in this action, marching towards Jerusalem from Qalandia refugee camp. This camp where Palestinians who were forced out of their villages and cities by the colonial occupation in 1948 reside. We march towards Jerusalem in spite of the military checkpoints and the illegal apartheid wall. We will reach Jerusalem chanting for Jerusalem and holding the Palestinians flags high. We will chant long live Palestine, down with the occupation and we will pray in Jerusalem.

Tens of Palestinian popular resistance activists have succeeded in breaking through the Israeli apartheid wall around Qalandia airport on the outskirts of Jerusalem. They used metal ladders and bridges that they have prepared especially for the purpose of breaking through the wall.

Demonstrations heading towards Jerusalem have started this morning from all around the West Bank. Tens of Palestinians marched through the village of Hizmah to enter Jerusalem. They were stopped by illegal colonial settlers and the Israeli occupation army, they attacked the Palestinian activists violently with gas bombs and live bullets. They also attacked journalists.

In Bethlehem, tens of Palestinian activists succeeded in reaching the southern checkpoint, blocking them from entering Jerusalem. They were attacked violently by the large numbers of soldiers from the Israeli occupation army using gas bombs.

Popular resistance against the occupation for liberation 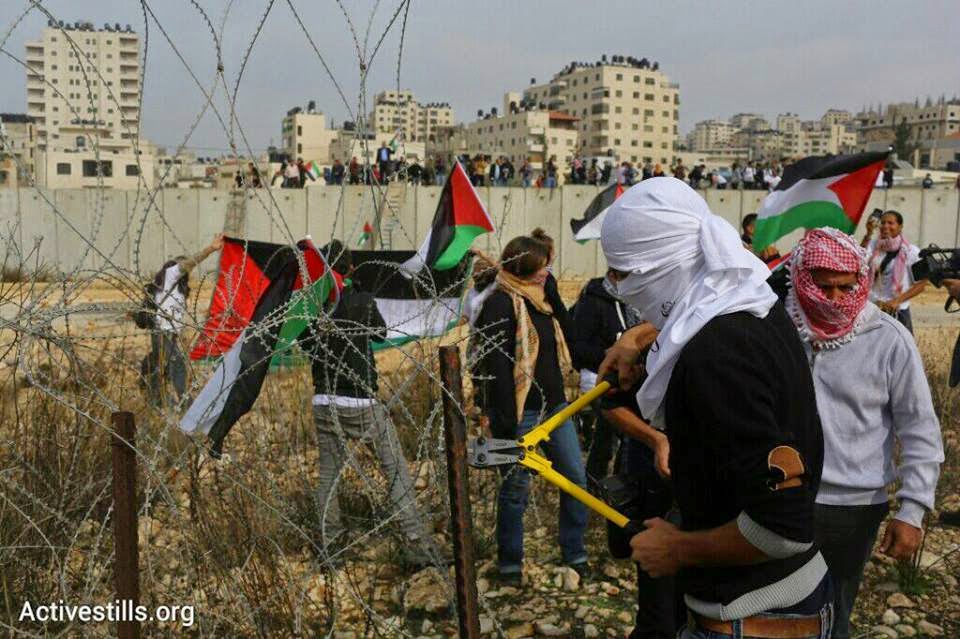 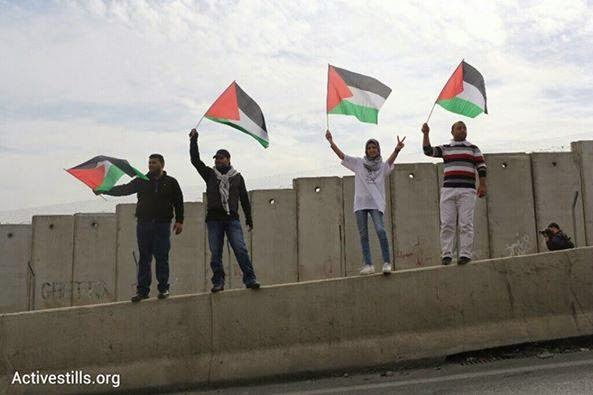 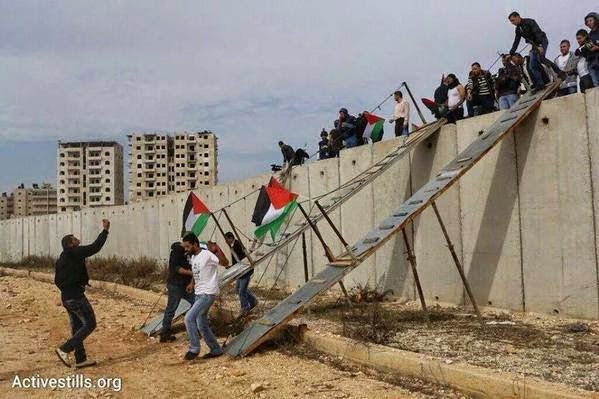 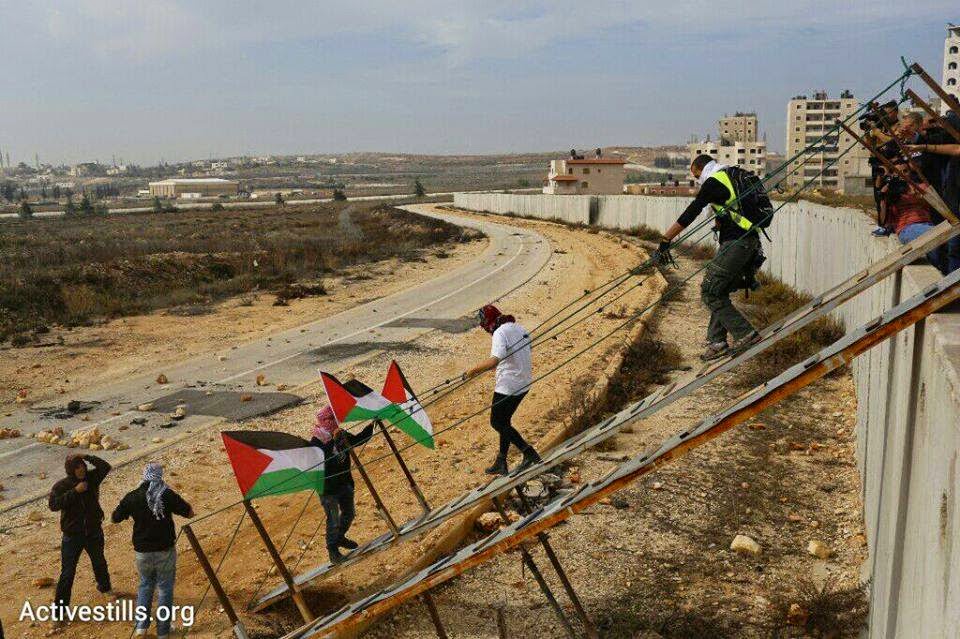 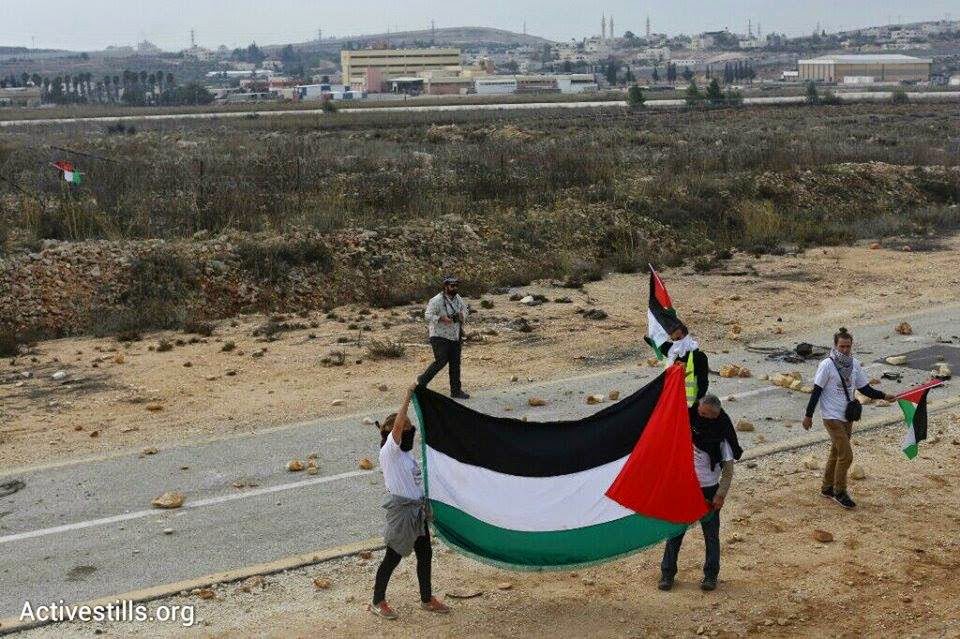 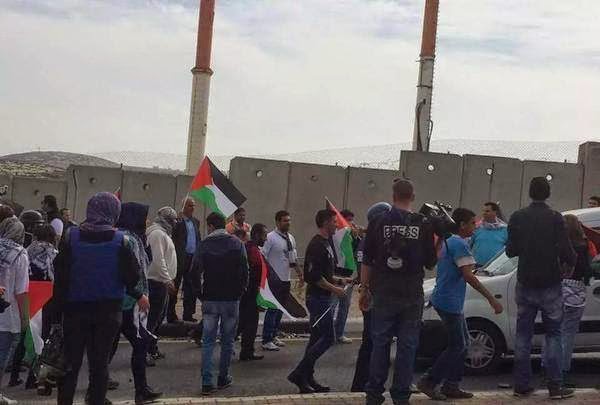 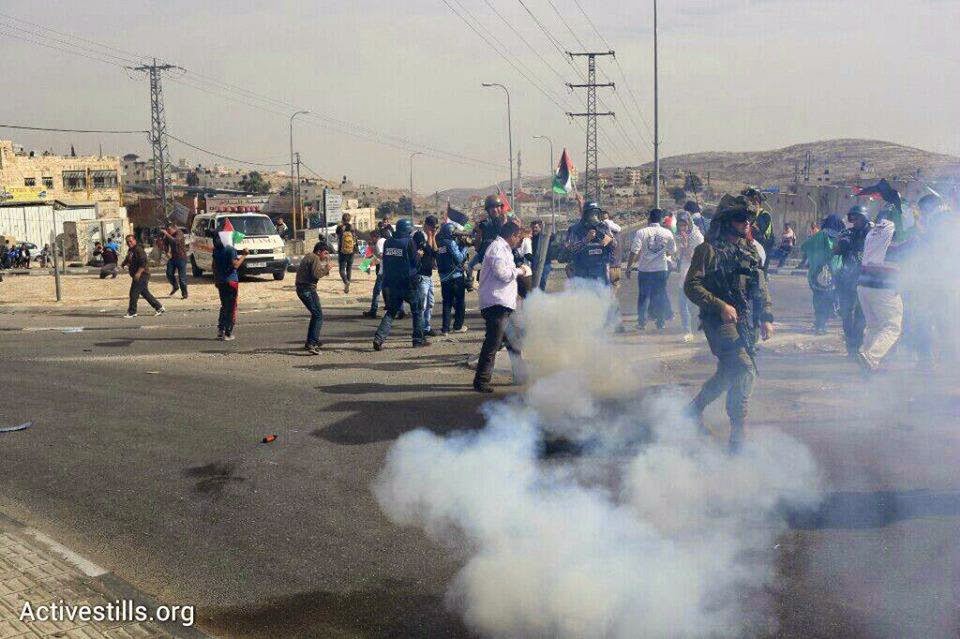 Dear friends,
just a short post to let you know I hope to resume posting to Live from Occupied Palestine more regular basis as soon as possible. Due to other commitments over the past month, including study, I have not been able to blog as regularly as I would like.

I have, however, been continuing to post relevant news updates and articles about Palestine on the corresponding Facebook page for Live from Occupied Palestine, so you can also keep up to date with news from Palestine by liking that page (please click here)

Thank you once again for continuing to support and follow Live from Occupied Palestine.  Regular blogging will resume very soon! :)

in solidarity, Kim
Posted by Kim at 6:55 PM No comments: