Dear friends,
this article about Israeli teenagers, who have been jailed for refusing to serve in the Israeli military, appeared on Maan News - www.maannews.net/en


Bethlehem – Ma’an – Five young Israelis who refused military service defied the separation between Israelis and Palestinians on Saturday evening to share their tales of prison, isolation, and struggle with an audience outside the West Bank city of Bethlehem.

They were four women and one man. All but one have already been to prison for their objection to serving in the occupying army. They slipped into Bethlehem in order to bring the message of the refusal movement to the Palestinians who face the guns wielded by their teenage peers every day.

“These soldiers don’t have to be bad people. They’re very ordinary people, but they’re doing these things. They are responsible,” said Sahar Vardi, 18, from Jerusalem. 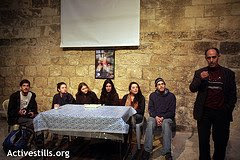 Nearly a hundred Palestinians and third-country nationals crowded into a small theater to listen to the Israeli youths at the Alternative Information Center (AIC), a joint Israeli-Palestinian organization in the town of Beit Sahour.

On Tuesday Israelis are expected to elect the most right-wing government in recent memory, but these five, represent a countervailing force, however small, to an Israeli society that appears more than ever to be in the grip of right wing nationalism. In Tuesday's election, the top slot is expected to go to the right-wing Likud party, and the third largest share of the votes to Avigdor Lieberman’s “Israel Our Home” party, one of whose slogans is “No loyalty, no citizenship.”

“Refusing is a break from the Jewish-Israeli consensus,” said 22-year-old Alex Cohn, “It’s the beginning of a journey, not an end.” Cohn spent a total of five months in a military prison in 2005 for his refusal. 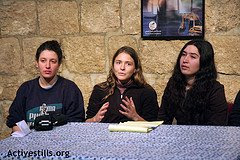 
The refuseniks’ message of moral objection was welcomed by at least some of the Palestinians who attended the panel. One student from Bethlehem said, “Every day I go to school at the Al-Quds university, which is in a town next to Jerusalem. I have to pass through a checkpoint twice a day. So, statistically speaking, if I’m standing in front of five Israelis, they’re probably going to be pointing guns at me. Instead I’m standing here applauding you.”

The five each explained their decision to refuse in terms of their life experiences. For some it was visiting the occupied territories and witnessing the brutality of the Israeli army first hand. Tamar Katz, 19, visited the Israeli-occupied city of Hebron with the group Breaking the Silence, and found the formerly bustling Old Market a “ghost town.”

Katz has spent three separate terms in prison ranging from two to three weeks each. When she refused to wear an American donated military uniform during one of her terms, she was remanded to solitary confinement. 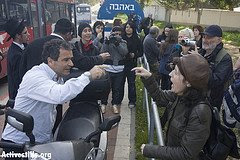 Eighteen-year-old Sahar Vardi said she has been active in Palestinian issues since the age of twelve, but it was not until she began attending demonstrations in the West Bank that she “realized who was responsible for [the occupation],” specifically, individual soldiers who are the ones who carry out the daily violence of the occupation. Before facing tear gas and Israeli bullets at a demonstration in the town of Bil’in, Sahar said she blamed the Israeli government, in abstract terms, for the occupation.

18-year-old Neta Mishly also went to the weekly demonstrations in Bil’in and recalled “what it felt like when the soldiers were shooting at me … I was just a 16-year-old girl.”

“I saw who the military is fighting against; it’s not another army, it’s normal people trying to live their lives,” said Mishly, who will likely go to prison in April.

“These soldiers are the same people we were supposed to be, the same as our friends and fathers,” said Mishly. 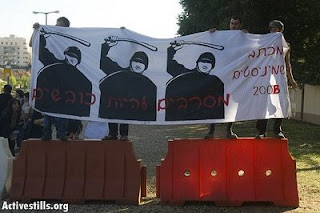 Protst in support of teenage refuseniks
Photograph by Oren Ziv, ActiveStills (published with permission from ActiveStills)

The young Israelis also talked about what 19-year-old Mia Tamarin called “the stamp of the refuser,” the social isolation they face in a society where everyone is a soldier. Tamarin, a committed pacifist who spent two years in an educational program where she met women from all over the Middle East, said that her decision to refuse also led her to leave home.

Alex Cohn also said he faced tension with his family. “When my brother heard he called me very angrily, saying ‘you’re going to rot in prison,’” he said, then recalling that his brother changed tones, “’You’re going to sit in prison and read books while I’m risking my life.’”

Israel’s rightward lurch going into Tuesday’s elections, Cohn said, “is like falling down a cliff. It’s a nightmare. We can only hope that people wake up from this nightmare.”

“But,” he added, “Maybe it will lift the mask of Israeli democracy, and there will be more pressure on Israel from the outside." 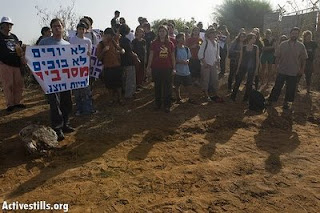 Demonstration in support of Israeli high school refuseniks outside Tzrifin Prison in Israel, 4 October, 2008
Photo by Oren Ziv, ActiveStills (published with permission from ActiveStills)
Posted by Kim at 3:58 AM No comments:

In 2005, more than 170 Palestinian civil society organisations, including political parties, unions, associations, coalitions and other civil organisations representing the Palestinian people in the 1967 and 1948 territories and the diaspora issued a call for Boycott, Divestment and Sanctions against Israel.

Inspired by the struggle of South Africans against apartheid, the BDS campaign is conducted in the frame work of international solidarity and resistance to injustice, occupation and oppression. The campaign calls upon international civil society organisations and people of conscience all over the world to impose broad boycotts and implement divestment initiatives against Israel similar to those applied to South Africa in the apartheid era, while also calling for pressure to be place on governments to impose embargoes and sanctions against Israel until it meets its obligations to recognised the Palestinian people’s inalienable right to self determine and Israel fully complies with international law by:

1. End its occupation and colonisation of all Arab lands and dismantling the Wall;

2. Recognising the fundamental rights of the Arab-Palestinian citizens of Israel to full equality; and

3. Respecting, protecting and promoting the rights of Palestinian refugees to return to their homes and properties as stipulated in UN resolution 194.


With the Boycott, Divestment and Sanctions (BDS) Campaign for Palestine gathering momentum world wide, a new Australian BDS campaign blog has been established at:


The site is dedicated to providing information about the developing BDS campaign in Australia, while supporting BDS actions and initiatives around the country in order to strengthen the campaign both in Australia and internationally.

BDS actions from around the world