Dear friends,
please find below a news article from Haaretz discussing the Talgit-Birthright program.  As many of you will be aware of Talgit-Birthright is funded by mulimillionaire hard right Zionist, Sheldon Adelson. The program is NOT apolitical.

It was set up to encourage young American Jews to make Aliyah. All of this is done within the frame work of the Zionist world view. As a result, the program actively downplays Israel's illegal military occupation of Palestine and the human rights abuses and war crimes carried out against Palestinians by the Zionist state.

There has been efforts over the years by young dissident Jewish activists to foster more honest engagement via Birthright in regard to the reality of Israel's military occupation and apartheid regime, including setting up alternative tour programs to allow young Jews who participated in Birthright to visit the Occupied West Bank to see for themselves the reality of Israel's occupation.

The walk out of five participants from a recent Birthright Tour has made the news in Israel mainly because there is an increasing concern within Zionist circles that more and more young Jews are not falling behind the Zionist narrative as they once did.  For more information on this see:


As Israel turns 70, many young American Jews turn away 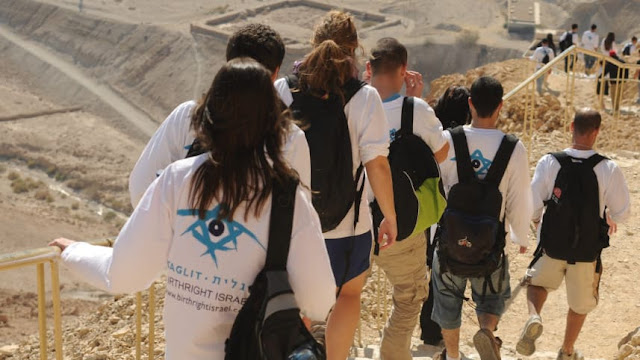 A group of five American Jews visiting Israel as part of the Birthright Israel program left the trip Thursday in protest of the program's treatment of the occupation and joined a tour of Hebron led by anti-occupation army veterans' group Breaking the Silence.
The group split off from the rest of the tour on the eighth day of their trip. One of those who left the group said that Birthright, the organization that brings young Jewish adults on free, 10-day visits to Israel, "is not providing the kind of education that we really need... and is telling a one sided story. This is not fair, and we deserve the truth."
The five young Americans live-streamed the incident on Facebook, where they are seen leaving the bus and arguing with their guide and with fellow participants. They also published a statement on a Twitter account.
Following the incident one of the five people who walked off, Sophie Lasoff, 24, told Haaretz that she wanted to participate in Birthright due to its significant place in the American Jewish community, and that she and her friends did not initially plan to leave the Birthright program.
(for full text of statement, see end of blog article) 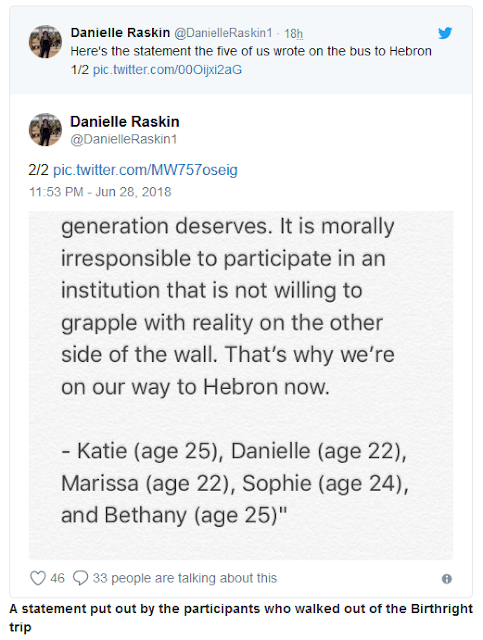 “I wanted to give Birthright a chance”, says Lasoff. “We didn’t want to do something like that, but we felt that it was the right thing to do.”
Lasoff told Haaretz that the members of the group did not know each other before the trip to Israel, and did not plan the action beforehand. She explained that they felt disappointed with the program's treatment of the occupation, and therefore contacted Breaking the Silence, an Israeli veterans organization that collects testimonies from Israeli soldiers about their service in the territories, and coordinated to join their tour of the West Bank.
Another woman who left the tour, Katie Anne, claimed on the live stream that "Birthright gave us a map of Israel that does not denote the West Bank [even though] the director of our Birthright organization admitted that the majority of maps in Israel do include [it]. They keep saying they're apolitical but this is clearly to the right."
Anne added: "We love our Jewish community and that's why it's so hard for us to see Birthright systemically miseducating it. We cannot stand this injustice."
After leaving the Birthright bus, the group visited Hebron and Bethlehem.
This week, IfNotNow, an anti-occupation movement led by young U.S. Jews, launched a new campaign targeting the Birthright program. The campaign, called, #NotJustAFreeTrip, seeks to "pressure Birthright to tell the truth about the Israeli occupation to its 40,000 young Jewish participants". IfNotNow activists have been gathering in airports in the U.S. to engage with participants as they leave on Birthright trips, encouraging them to question the tour guides about the occupation.
Yonah Lieberman, spokesperson for IfNotNow, told Haaretz that members of his group met the group who left for the Birthright trip as they were flying to Israel from JFK airport in New York last week.
In response to the protest, Birthright said that it is "an apolitical project and the leading educational initiative in Israel." The organization added that "since we respect our participants' abilities to form their own opinion, we reject the promotion of any agenda and any attempt at manipulation of provocation by any political side."
In November, Haaretz reported that Birthright's education department instructed its trip providers to stop including meetings with Israeli Arabs on their itineraries.
Birthright mandates that all of its trips include meetings with Israeli soldiers. Haaretz also reported last year that Birthright is promoting a free stay for participants who extend their time in Israel beyond the 10 days offered if they choose to remain at a hostel in Jerusalem’s Old City run by an extremist rabbi aligned with radical factions of the settler movement who encourages those who stay with him to volunteer at illegal Israeli outposts in the West Bank. 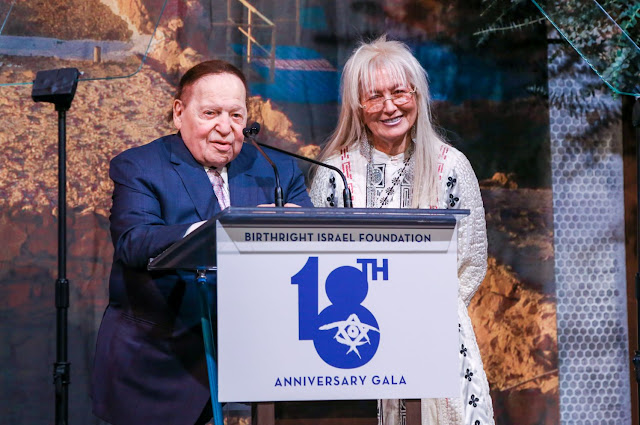 Sheldon Adelson and Dr. Miriam Adelson attending Birthright's 18th anniversary gala in New York, April 15, 2018.Michael Priest Photography
Birthright’s single largest donor today is casino-magnate Sheldon Adelson, a major supporter of the Republican Party and of Israel’s right-wing government. Adelson and his associates have long insisted, however, that he does not intervene in any way in Birthright's itineraries.
In April, 150 students protested a Birthright annual gala in New York.
Breaking the Silence has faced severe criticism by the Israeli government, including attempts to silence the group through legislation.
FULL TEXT OF STATEMENT ISSUED VIA TWITTER: 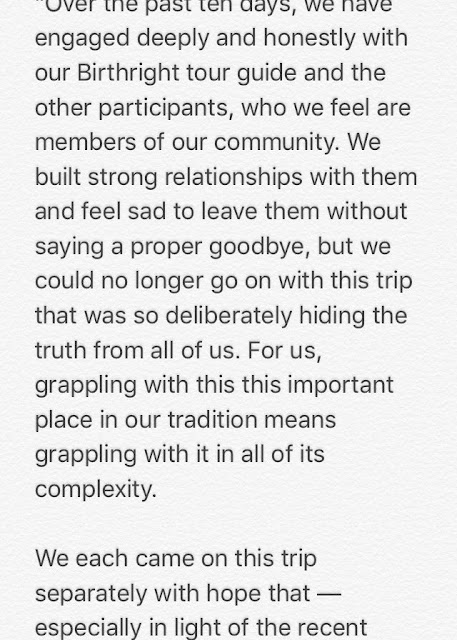 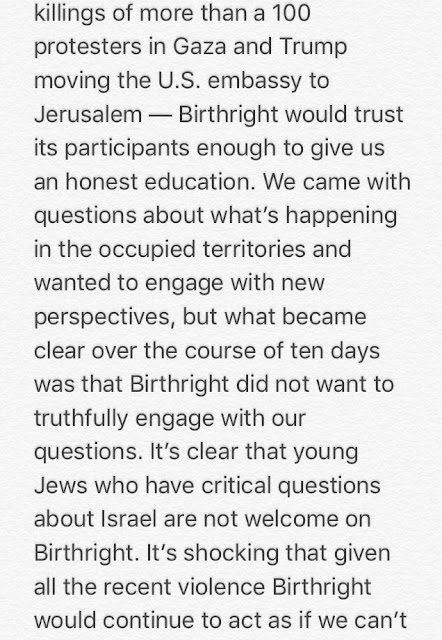 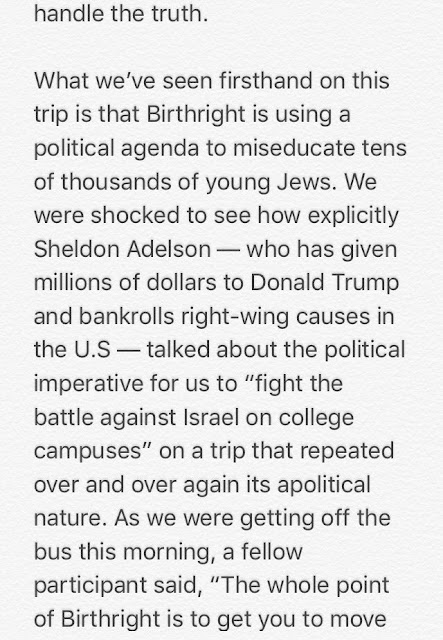 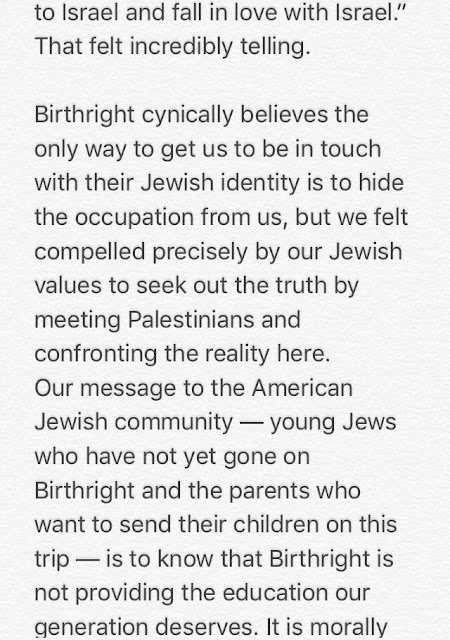 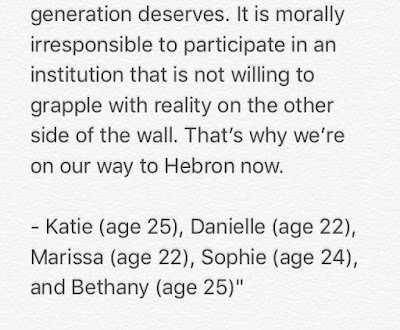 UN Condemns Israel's 'Excessive Use of Force' in Gaza

Dear friends,
As you will be aware, Israel has repeatedly used excessive force over the last weeks against Palestinians in Gaza, killing 129 Palestinians and injuring hundreds more.

Once again, Australian Prime Minister Malcolm Turnbull and the governing Liberal-National Party have blood on their hands.

Here is the reports on the vote from Al Jazeera and Haaretz.

The resolution, backed by 120 countries, rejected a US bid to blame Hamas for the violence that has left 129 dead.

The UN General Assembly on Wednesday condemned Israel for excessive use of force against Palestinian civilians, in a resolution adopted by a strong majority of 120 countries.

The 193-member world body rejected the United States' efforts to blame Gaza's Hamas rulers for the violence that has killed over 120 Palestinians in the past two and half months.

The resolution deplores Israel's use of "excessive, disproportionate and indiscriminate force" against Palestinian civilians and calls for protection measures for Palestinians in Gaza and the occupied West Bank.
Presented by Algeria and Turkey on behalf of Arab and Muslim countries, the measure won a decisive 120 votes, with eight votes against and 45 abstentions.

The resolutions are not legally binding but carry political weight.

Australia, the Marshall Islands, Micronesia, Nauru, Solomon Islands and Togo joined Israel and the US in voting against the resolution, which comes weeks after Washington vetoed a similar resolution in the 15-member UN Security Council.

At least 129 Palestinians have been killed by Israeli forces in Gaza border protests since March 30 to commemorate 70 years since the Nakba (or Catastrophe), when about 750,000 Palestinians were driven out from their homes.

The largest number of deaths occurred on May 14, the day the US moved its embassy in Israel to Jerusalem from Tel Aviv. Palestinians and their supporters said most protesters were unarmed civilians and Israel used excessive force against them.

"We need protection of our civilian population," Palestinian UN envoy Riyad Mansour told the General Assembly before the vote, adding that the resolution was "intended to contribute to a de-escalation of the volatile situation".

"We cannot remain silent in the face of the most violent crimes and human rights violations being systematically perpetrated against our people," Mansour said.

Despite international condemnation of its use of lethal force, Israel said many of the dead were armed and that the Israeli army was defending itself against attacks on the border fence with Gaza. Washington has maintained Israel's right to defend itself.

The resolution also asked UN chief Antonio Guterres to report back within 60 days on proposals "on ways and means for ensuring the safety, protection and well-being of the Palestinian civilian population under Israeli occupation, including ... recommendations regarding an international protection mechanism."


No mention of Hamas

While the General Assembly text condemned the firing of rockets from Gaza into Israeli civilian areas, it did not mention Hamas, the group that governs Gaza.

US Ambassador Nikki Haley dismissed the resolution as "one-sided" and accused Arab countries of trying to score political points at home by seeking to condemn Israel at the United Nations.

"For some, attacking Israel is their favourite political sport. That's why we are here today," Haley told the Assembly.

An amendment presented by the US that condemned Hamas for "inciting violence" along the border with Gaza failed to garner the two-thirds majority needed for adoption.

In December 128 countries defied President Donald Trump and voted in favour of a UN General Assembly resolution calling for the US to drop its recognition of Jerusalem as Israel's capital.

General Assembly passed the resolution with 120 countries in favor and only 8 opposing. U.S. tried to add Hamas condemnation, but couldn't garner sufficient majority 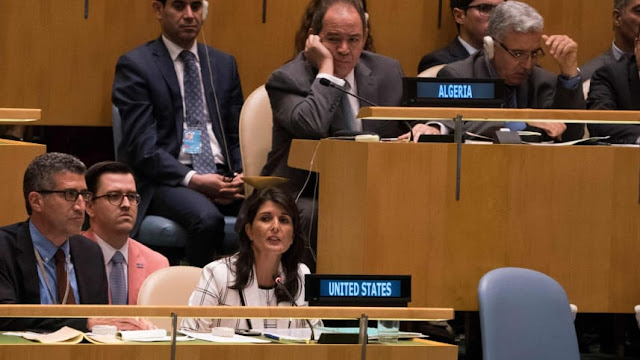 The UN General Assembly passed a resolution Wednesday night condemning Israel for excessive use of force against Palestinian civilians and proposing forming an international protection mechanism in Gaza.

The resolution is not expected to lead to action against Israel since any attempt to bring such a decision to the Security Council is expected to be met with a U.S. veto.

The resolution passed with 120 countries in favor, eight against, and 45 abstaining. It was put forward in the General Assembly by Algeria, Turkey and the Palestinians.

U.S. Ambassador to the UN Nikki Haley criticized the General Assembly for discussing the situation in Gaza instead of the crises in Nicaragua, Yemen and Burma. "Gaza is important, but what makes it more urgent than many other desperate places?" Haley asked. "What makes Gaza different for some is that attacking Israel is their favorite sport." She called the resolution condemning Israel "totally one-sided" and unhelpful for promoting peace.

Australia, the Marshall Islands, Micronesia, Nauru, Solomon Islands and Togo joined Israel and the United States in voting against the resolution.

"We need protection of our civilian population," Palestinian UN envoy Riyad Mansour told the General Assembly before the vote, adding that the resolution was "intended to contribute to a de-escalation of the volatile situation." "We cannot remain silent in the face of the most violent crimes and human rights violations being systematically perpetrated against our people," Mansour said.
Posted by Kim at 10:19 PM No comments: