A short note on Stephen Hawking, BDS and the Palestinian Right to Education

by Kim Bullimore
In the last few days there has been article after article on renown scientist, Stephen Hawking's withdraw from the President's Conference in Israel.  Hawking has been praised by Palestinian and pro-Palestine solidarity campaigners and, unsurprisingly, he has been denounced by Israel and its supporters.  Those decrying Stephen Hawking's actions and the Palestinian academic boycott of Israel claim that it is an attack on academic freedom.  This is, of course, not true.  The Palestinian academic boycott campaign is an institutional boycott, not an individual boycott, so academics are not prevented from carrying ot their research or from writing papers etc.

I have many Palestinian friends who recount how in order to finish their degrees they had to take their classes clandestinely – sometimes in fields, sometimes in hidden back rooms and other places.  They constantly lived in fear of being caught by the Israeli Occupation Forces.  Their only "crime" was wanting to get an education.  Similarly since the beginning of the second intifada, Israel has regularly closed down Palestinian education institutions.

Today, Palestinians are regularly prevent from getting an education, from attending their schools and universities by not only by Israel's occupation forces (IOF) but also by the apartheid wall. Their education institutes are often forced to close, their campuses are often raided by the IOF, their classes disrupted and teachers and students regularly arrested, tortured and killed. It is still an exceeding common occurrence for Palestinian teachers to conduct classes at checkpoints because they and their students can’t get to their education institutes.  As one Palestinian teacher has stated:

“I teach at the Qurduba School in Hebron. To get to school we have to pass though an area around Israeli settlers that the military controls. After protesting the delays, a special “teachers-only” line was introduced that allowed us to pass freely to and from the school. Recently, however, the IDF shut that line down. What used to take five minutes can now be an hour-long process. While we are planning ways to protest against these measures, we must endure this humiliation daily, just to teach our classes.” 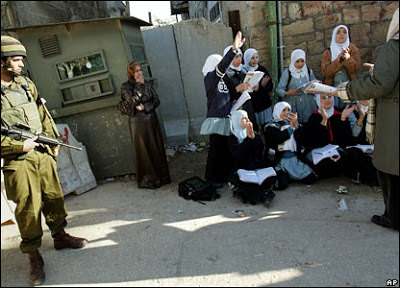 So if we are going to talk about “academic freedom” and its curtailing, lets talk about this.This is where there is a really attack on academic freedom is happening, this where the real restriction on the right to students to get an education and a real undermining of the rights of teachers and academics is taking place in the Palestine-Israel context.

For more information on this, please check out the Palestinian Right to Education campaign (click here)

See also: The Daily Ordeal of getting to School in Hebron, published on Electronic Intifada (click here)