B'Tselem & ACRI on the illegal suppression of protests in Nabi Saleh

Dear friends,
earlier this month, Israeli human rights group, B'Tselem issued a report called "Show of Force", which outlines the conduct of the Israeli military in the weekly demonstrations in the village of An Nabi Saleh.

I have included below the executive summary of the report below.  To read the report in FULL, click here


Also below, I have included a video of the media conference which took place in Nabi Saleh upon the release of the report, which outlines the findings of the report, includes video footage and explains in some detail the restriction of the right to protest.
If you would like to keep up to date with the non-violent struggle of the people of An Nabi Saleh, please visit the Nabi Saleh Solidarity website here and the Nabi Saleh Solidarity page on Facebook here.

A-Nabi Saleh is a Palestinian village in the West Bank, north of Ramallah. For for more than eighteen months now, every Friday, its residents have demonstrated against settlers seizing nearby land that belongs to Palestinians. The Friday processions held in the village have become one of the main sites of weekly protest in the West Bank in recent years.

In their handling of the protests in a-Nabi Saleh, Israel’s security forces have infringed the rights of the Palestinian demonstrators in three fundamental ways, as follows:

Violation of the right to demonstrate

B’Tselem’s documentation indicates that Israel does not recognize the right of a-Nabi Saleh’s residents to demonstrate. Israeli security forces prohibit the demonstrators from reaching the site that is the subject of the demonstration – al-Qawas Spring and the land around it – and prevent the procession from exiting the village towards the spring. Also, the army declares the demonstration illegal at the outset, sometimes even before the procession begins. The army also issues an order declaring the entire village a closed military area every Friday, and blocks the roads leading to it. As a result, persons from outside the village are unable to exercise their right to join in the demonstration.

Excessive use of means for dispersing demonstrations 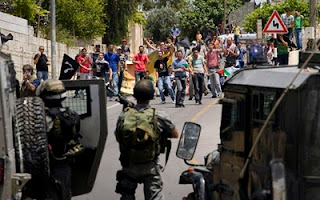 Harm to the civilian population

The army and the Border Police invest a great amount of resources in dispersing these regular demonstrations, in which several dozen people participate. These resources include the deployment of forces at the main intersection of the village, and the vast quantities of means to disperse demonstrations. Handling of the demonstrations in this manner is disproportionate. It intimidates hundreds of villagers and forces them to remain in their houses for many hours, making it impossible for them to lead a normal life. The massive amounts of tear gas fired penetrate the houses close to the main intersection in the village, and the occupants are unable to escape.

Also, the restrictions on movement in the area every Friday create difficulties for residents of all the nearby villages.

In advance of the expected declaration of a Palestinian state on 20 September 2011, Israel’s defense establishment is preparing to cope with wide-scale demonstrations in the West Bank. As part of the preparations, the security forces must recognize Palestinians’ right to demonstrate, and must allow them to protest against infringement of their rights. The decision to disperse a demonstration must be made only after the relevant authorities have properly balanced the right to demonstrate against other relevant interests, as is done in the case of demonstrations held inside Israel. In any event, means for dispersing demonstrations must not be used in a way that injures persons or punishes all residents of the village.